The Tokyo Shimbun has learned that Japanese security guards at the U.S. Sasebo Naval Base (Nagasaki Prefecture) had been instructed by base security forces to walk on along a public road outside the base to a different facility at a separate site while carrying loaded handguns during the period from May 2 through May 10. Japanese base employees are allowed to carry firearms on U.S. bases under the Japan-U.S. Status-of-Forces Agreement (SOFA), but the possession of firearms off base is in violation of the pact and could be in violation of Japan’s Swords and Firearms Control Law. Although the Ministry of Defense (MOD) had requested the U.S. military side to terminate the practice, it was carried out. MOD again called on the military to halt the practice, but the practice has continued for some time.

Japanese security guards are employed at U.S. military bases not only in the Tokyo metropolitan area but across the country. A similar problem may happen again. MOD says that it will “hold discussions with the U.S. to prevent a recurrence.” 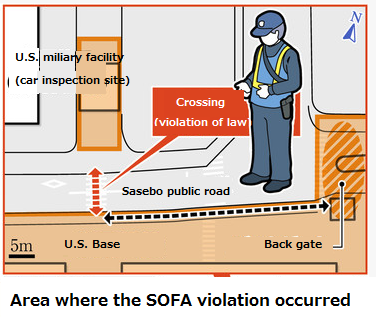 According to the Nagasaki district head office of the All Japan Garrison Forces Labor Union (Zenchuro), which is formed by MOD and base employees, the U.S. military instructed Japanese security guards to move to another military facility (a vehicle inspection site) located in an enclave about 60 meters away from the base via the back gate to the base (Tategami Gate) while carrying guns to perform their duties there. A 50-meter stretch of the road to the enclave lies outside the base fence but is located within the military district. Japanese security guards worried that they may violate the Japanese law as they would have to walk for about 10 meters off base on a Sasebo City Road . But the base security personnel had reportedly told them “there should be no problem.”

The Japanese employees were carrying automatic handguns, which they are allowed to possess while on duty on base.  Each of these guns was loaded with 15 live bullets. They also carried two reserve cartridges (which contain 15 bullets each). They walked off base while carrying guns from May 2 to at least May 9, except on Saturday May 4 and and Sunday May 5. A total of about 20 people were likely involved in this practice.

That particular portion of the public road is used by vehicles not only from the U.S. military and Japan’s Maritime Self-Defense Force but also from private companies. The “Tategami Brick Warehouses,” which were built by the former Japanese Navy during the Meiji Era, are located nearby, attracting a number of visitors and tour buses. There had been concerns about the risk of involving civilians in accidents or incidents.

MOD had learned about the instruction from Zenchuro on April 24 before the practice was carried out and made an oral request to the USFJ headquarters (Tokyo) to call it off. But on May 7, after the Golden Week holiday, it was informed by Zenchuro that the U.S. military had made Japanese security guards carry handguns off base. It again demanded orally that the practice be stopped.

Since the U.S. military continued to make Japanese security guards carry handguns off base, MOD issued a written request addressed to USFJ’s on-base security section in the name of the director of the ministry’s labor management division to call for the immediate termination of the practice and prevent the recurrence of the practice. On May 9, with the cooperation of the Ministry of Foreign Affairs, it also contacted the U.S. Embassy in Tokyo to make a similar request. It was confirmed during the day of May 10 that the practice was finally terminated. After that, the U.S. military reportedly switched to the conventional method of transporting Japanese security guards by car and the handguns being kept by U.S. military personnel during the transportation.

“It may have taken some time for the on-site unit to receive the notice,” said a person with MOD’s labor management division. “Nonetheless the practice constitutes a violation of the SOFA and it is regrettable. We want to hold talks with the U.S. military side on how to prevent a similar incident from happening in the future.”

The public affairs office of the USFJ headquarters commented that “we are currently coordinating with relevant offices on how to respond.”