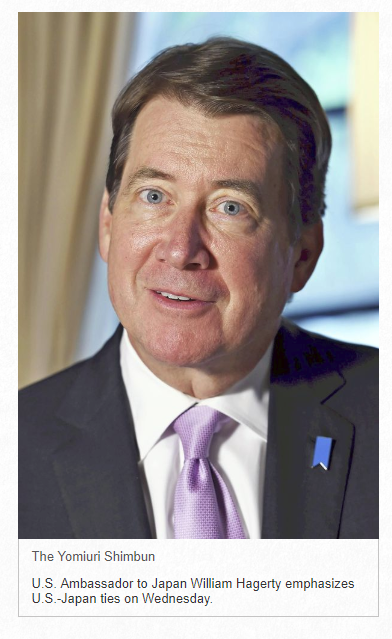 U.S. Ambassador to Japan William Hagerty said the United States will support Japan in efforts to work toward solving the issue of Japanese nationals abducted by North Korea and realizing a Japan-North Korea summit meeting.

Speaking in an interview with The Yomiuri Shimbun at the ambassador’s residence in Tokyo on Wednesday ahead of U.S. President Donald Trump’s visit to Japan later this month, Hagerty also stressed the need to conclude new Japan-U.S. trade talks at an early date.

Trump is scheduled to arrive in Japan on May 25 and stay in the country through May 28 as the first state guest since the beginning of the new Reiwa era.

“[The president’s visit] sends a message to the world that there is no stronger alliance than the one between the United States and Japan,” Hagerty said. “The president and the first lady are very honored to be the first state guests in the Reiwa era.”

Hagerty was present at the April 26 talks between Prime Minister Shinzo Abe and Trump in Washington. The ambassador made it clear that Trump supported Abe’s desire to realize talks with Kim Jong Un, chairman of the Workers’ Party of Korea.

“There is no divide between the United States and Japan,” the ambassador said regarding the two leaders’ conversation about the abduction issue.

With regard to the abductees and their family members, Hagerty stressed, “The president has a very special place for them in his heart.” Trump brought up the abduction issue in the summit talks he had with Kim, so “the North Koreans know this is important to us as well,” the ambassador said.

Negotiations between Tokyo and Washington to reach a new trade pact are still ongoing, even after the implementation of the Trans-Pacific Partnership trade pact in December among 11 countries, which does not include the United States, and the economic partnership agreement that took effect in February between Japan and the European Union.

“The president wants to see progress on this and is quite frustrated frankly with the slow progress,” Hagerty said.

At the Japan-U.S. summit talks in April, Trump indicated the possibility that he may agree on a new trade pact before his state visit to Japan in May. Although Hagerty did not say when would be ideal timing to sign an accord, he said, “I hope that it occurs quickly.”

Excerpts from the interview will appear in Saturday’s issue.