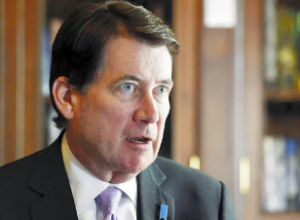 Yomiuri front-paged its interview with Ambassador Hagerty that was held on Wednesday at his official residence in Tokyo. The paper wrote that ahead of President Trump’s planned visit to Japan later this month, the Ambassador expressed the U.S. government’s position of supporting Japan’s efforts to resolve the DPRK’s abductions of Japanese nationals and realize a summit between Prime Minister Abe and its leader Kim Jong Un. The paper wrote that the Ambassador stressed the significance of a planned visit to Japan by President Trump from May 25 through 28 as the first state guest in the Reiwa Era by saying that the visit will deliver a message to the world that the U.S.-Japan alliance is “the strongest alliance in the world, bar none.” Noting that Ambassador Hagerty attended the President’s meeting with Prime Minister Abe in Washington on April 26, the paper quoted the Ambassador as saying that the President expressed his support for the prime minister’s effort to seek a summit with Kim Jong Un. The Ambassador also emphasized that the President has “special feelings” for the Japanese abductees and their families and expressed the view that the DPRK has come to realize that the United States attaches importance to the abductions because the President brought up the issue in his meetings with Chairman Kim.

On the economic front, Ambassador Hagerty reportedly welcomed the Japanese government’s de facto exclusion of Huawei products from its procurement of telecommunications equipment and pointed out the need for the United States and Japan to work together to urge China to achieve structural reform to prevent violations of intellectual property rights. Concerning the new trade talks between the United States and Japan, the Ambassador reportedly said that the President is very dissatisfied with the fact that a trade pact with Japan is lagging behind the TPP and the Japan-EU EPA, which were effected in December 2018 and February of this year, respectively, and is hoping negotiations with Tokyo will proceed swiftly.