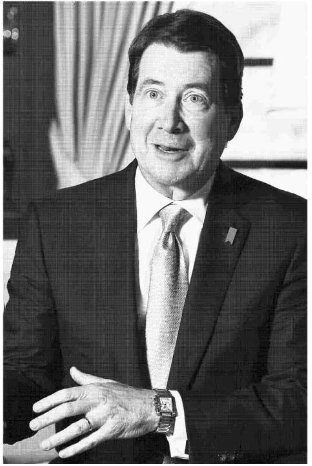 U.S. Ambassador Hagerty at his residence on May 15 (photo by Miho Ikeya)

Interviewers: Kentaro Nakajima of the Political Desk and Koya Ozeki of the International Desk

In an interview with the Yomiuri Shimbun on May 15, United States Ambassador to Japan William Hagerty emphasized that the Japan visit by U.S. President Donald Trump at the end of May will be an opportunity “to strengthen the alliance.” He also expressed strong dissatisfaction with the slow progress made on the new trade pact being negotiated between Japan and the United States.

Ambassador Hagerty: The relationship that has blossomed between the United States and Japan has produced wonderful results from the perspective of diplomacy, security, and the economy. President Trump and the First Lady regard it as an honor to be the first state guests in the Reiwa Era.

Yomiuri: What is the main goal of the visit?

Ambassador Hagerty: The goal is very clear. It is to send the world the message that there is nothing stronger than the Alliance between the United States and Japan.

Yomiuri: What did the two leaders discuss in relation to North Korea at their April summit?

The President encouraged Prime Minister Shinzo Abe, who has said he wants to speak directly with Jong Un. The President supports the dialogue that Prime Minister Abe is trying to initiate. The United States will support Japan’s efforts no matter when the door to dialogue opens.

“Honored” to be first state guest in Reiwa Era

Yomiuri: U.S.-DPRK negotiations on denuclearization have made no progress.

Ambassador Hagerty: The president is open to holding dialogue with the North. This stance remains unchanged even after the launch of missiles. We continue to call for the final and fully verified denuclearization (FFVD) of North Korea. This precisely means that the North must completely abolish all ballistic missiles and weapons of mass destruction, which pose a threat to the U.S. and our allies.

Ambassador Hagerty: Of course we do. We need to be particularly careful not to expose our social infrastructure, such as electricity, water supply and automobile transportation, to unnecessary risk. Japan and the U.S. share concerns about Chinese firms like Huawei which are vulnerable to state control and pressure.

Japan has made the same decision (concerning Huawei products) as the U.S., and Australia also followed suit. This decision that is vital for protecting infrastructure was made on the basis of a multilateral foundation.

Yomiuri: How should Japan and the U.S. cooperate with each other in dealing with China?

Ambassador Hagerty: The U.S. is calling for the reform of the World Trade Organization (WTO) together with Japan and the European Union (EU). Problems such as forced technology transfer and intellectual property theft did not exist when WTO rules were made. We need to bring China’s actions into compliance with global rules.

The president will not make a deal with China that does not function well. Japan will benefit if the U.S. and China clinch a deal. Beside WTO reform, there are many other opportunities for Japan and the U.S. to work together. Our goal is for China to carry out economic reform and conform to a modern market economy.

President Trump is dissatisfied with the stagnant trade negotiations with Japan

Yomiuri: How do you view the current bilateral negotiations between Japan and the U.S.?

Ambassador Hagerty: After 2015, the Trans-Pacific Partnership (TPP) agreement “died” politically in the U.S. The Congress did not sufficiently support the TPP and the major presidential candidates did not support it either. The U.S. was no longer able to join the TPP. It was no surprise that the President announced the U.S.’s withdrawal from the TPP.

During the first bilateral summit when Prime Minister Shinzo Abe visited the U.S. in 2017, the two leaders decided that economic dialogue would take place between Deputy Prime Minister Taro Aso and Vice President Mike Pence. When Prime Minister Abe visited the U.S. in 2018, the president expressed dissatisfaction about the lack of progress in the economic talks. Minister of State for Economic and Fiscal Policy Toshimitsu Motegi and USTR Robert Lighthizer started negotiations, but no agreement has yet been made.

President Trump is very frustrated by the absence of progress in the Japan-U.S. trade negotiations. He is particularly dissatisfied with the fact that before Japan and the U.S. reached an agreement on trade negotiations, the TPP among 11 countries without the U.S. and the Economic Partnership Agreement between Japan and the EU were concluded. On the evidence of Japan’s trade deficit with the U.S., the U.S. is obviously the “best customer” for Japan’s products. The president is displeased with the fact that the U.S. is Japan’s “best customer” but can’t get the “best deal.”

Yomiuri: President Trump referred to the possibility that Japan and the U.S. may conclude a trade agreement during his visit to Japan slated for May.

Ambassador Hagerty: I shouldn’t get ahead of officials responsible for the bilateral negotiations, but I hope the two countries will swiftly reach an agreement so that American farmers and businesses will no longer suffer disadvantages.

Yomiuri: Reaching an agreement seems difficult before the House of Councillors election scheduled for this summer.

Ambassador Hagerty: Japan had a House of Representatives election in 2017, but concluded the TPP and the EPA with the EU. I don’t understand why negotiations with the U.S. alone become an issue.

Yomiuri: Will the U.S. possibly impose additional tariffs on automobiles exported from Japan? 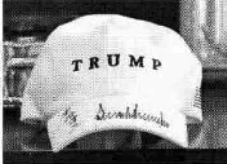 Their personal relationship has developed by leaps and bounds as they have spent time together. Neither of them is stiff or formal. They laugh and chat over cheeseburgers. When they played golf in April, they both signed my hat (see photo). They like doing these things.

Ambassador Hagerty: I was present at the April summit in Washington, and I played golf with them then. A very strong wind was blowing that day. We thought we would only play nine holes, but the two leaders kept saying, “Let’s play one more hole!” In the end, we played 18 holes. They confirmed their bond and friendship through golf. It would be nice if they could also play golf together during the upcoming trip.

Yomiuri: Apparently President Trump will personally hand a trophy to the victorious wrestler at the May Grand Sumo Tournament.

Ambassador Hagerty: Whether the President will present a trophy and, if he were to, how large the trophy would be – these are state secrets on a par with the leaders’ golf scores!

Profile of Ambassador Hagerty: After earning a J.D. from Vanderbilt University Law School, William Hagerty worked at a consulting company. He was stationed in Tokyo for three years. He served as Commissioner of the Department of Economic and Community Development for the State of Tennessee in the southern United States from 2011 to 2015. He joined the Trump campaign in the 2016 U.S. presidential election. He took up his post as U.S. Ambassador to Japan in August 2017. He is 59.