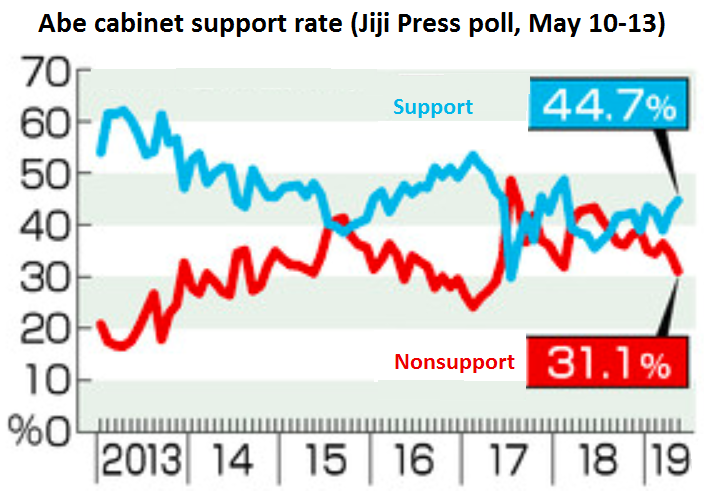 The disapproval rate fell 3.2 points to 31.1 pct, according to the poll conducted for four days through Monday.

The higher support rate was apparently backed by the celebratory mood related to the start on May 1 of the country’s new era, Reiwa, which succeeded Heisei, and the enthronement of new Emperor Naruhito on the same day, during an unprecedented 10-day holiday, pundits said.

As reasons for supporting the Abe cabinet, 22.2 pct said there is no other suitable person for the prime minister’s post, 11.5 pct cited Abe’s leadership skills and 10.4 pct said they trust him.

Support stood at 3.8 pct for Komeito, the coalition partner of the LDP, 2.1 pct for the Japanese Communist Party, 1.6 pct for Nippon Ishin no Kai (Japan Innovation Party) and 0.6 pct for the Democratic Party for the People.

The share of respondents who said they do not support any specific political party came to 59.6 pct, up 1.1 points.

The interview-based survey covered 2,000 people aged 18 or over across Japan. Valid responses were received from 62.8 pct. (JMH translated and added line graph from the Jiji online Japanese-language article.)