TOKYO — As the chill of the Arctic Ocean subsides and resources there become more accessible, countries are vying to exploit this largely untapped region.

Fishing and energy top the list, with Japan, the U.S., China, Russia and the European Union already moving toward regulating the former.

But the dynamics between the players is shaping up into a power struggle that reflects other events far from the Arctic.

In a speech on May 6 during the 11th Ministerial Meeting of the Arctic Council in Finland, U.S. Secretary of State Mike Pompeo stressed the need to prevent the Arctic Ocean from becoming a “new South China Sea.”

Pompeo’s speech came amid China’s militarization of the South China Sea. Japanese Foreign Minister Taro Kono echoed this sentiment, saying there is a need for “discussions on a legal system regarding the orderly use” of the Arctic Ocean. 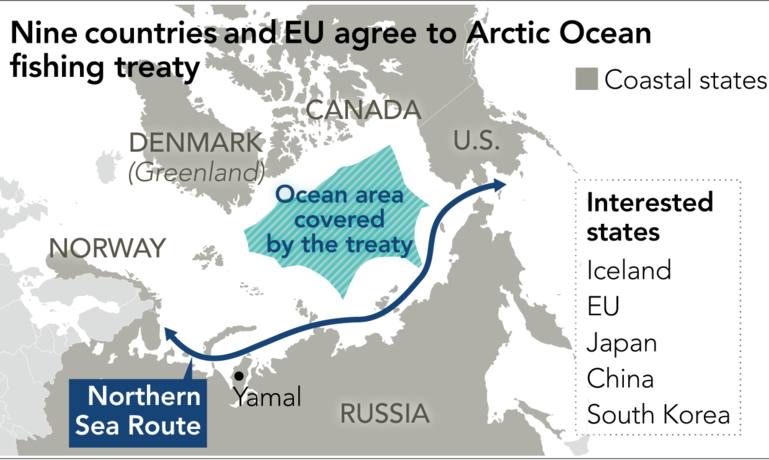 A treaty to allay these fears is already pending approval by countries in the region and the EU. The Agreement to Prevent Unregulated High Seas Fisheries in the Central Arctic Ocean has been signed by five coastal states — the U.S., Russia, Canada, Norway and Denmark — plus Japan, China, South Korea, Iceland and the EU.

Once approved by all signatories, the bloc will kick off a joint study on fish species and fish catches, with an eye to establishing a joint management body in about five years. If successful, the treaty may spawn similar agreements as regards energy.

And there is precedent. At the beginning of the 20th century, a number of countries began to make territorial claims in Antarctica. In a bid to stop the land grab, 12 countries — including the former Soviet Union, Japan, the U.S. and the U.K. — signed the Antarctic Treaty in 1959, freezing all territorial claims.

This was followed by a treaty in 1980 preserving the continent’s biological resources, which in turn resulted in a 1991 agreement designating Antarctica as a “natural reserve, devoted to peace and science” and banning all mineral-related activities there.

As the sea ice of the Arctic Ocean shrinks, it has become easier to extract and transport resources from the region. In areas not already regulated by countries’ exclusive economic zones, international treaties — like the fishing treaty pending approval now — will be needed to coordinate and regulate interests, not the least of which concerns energy.

According to the U.S. Geological Survey, the estimated oil and natural gas reserves in the ocean account for 13% and 30% respectively of the world’s total. 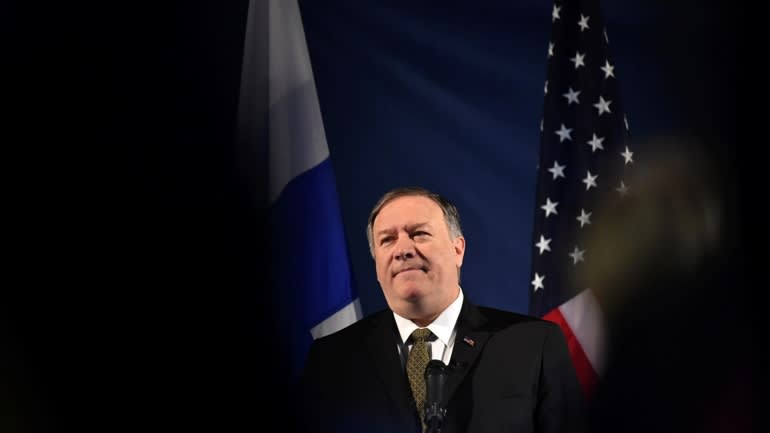 U.S. Secretary of State Mike Pompeo does not want the the Arctic Ocean to become a “new South China Sea.”

Russia is already developing oil and gas fields in Western Siberia, even after Western oil majors withdrew over the Ukrainian issue. A liquefied natural gas plant went online on the Yamal Peninsula at the end of 2017, with the China National Petroleum Corp. acquiring a 20% stake in the project.

The U.S. is aggressively drilling for gas in the state of Alaska, which borders the area. The state-affiliated Alaska Gasline Development Corp. is already planning to build a 1,300-km pipeline to move the LNG.

Meanwhile, China unveiled its Arctic development initiative in 2018. Dubbed the Polar Silk Road, the plan is to link it to the Belt and Road initiative. The country has also accelerated investment in Greenland, an autonomous territory of Denmark.

The importance of the Arctic Ocean is also growing for Japan. If the country can procure energy through the Northern Sea Route, it will be able to diversify away from its main suppliers in the Middle East. Japan is considering joining the Alaska project through Tokyo Gas, and obtaining a stake in a new Russian LNG project slated for completion in 2022 through Mitsui & Co.

These and other energy projects underscore the significance of the Arctic Ocean, with the 10 signatories to the fishing treaty being the main players in the region. The balance of power within the grouping will likely determine the success — or failure — of any development projects.