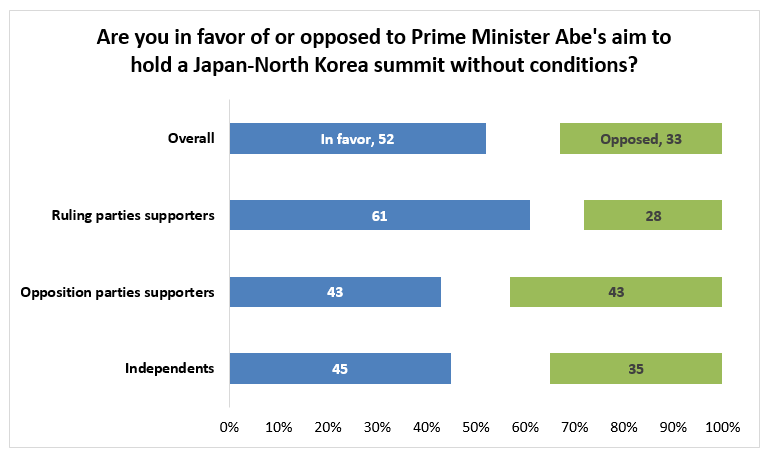 In the Yomiuri Shimbun poll conducted on May 17–19, a plurality of 52% of pollees said that they are “in favor” of Prime Minister Abe’s aim to hold a summit without preconditions with Workers’ Party of Korea Chairman Kim Jong Un, while 33% said they “oppose” the idea. By political party supported, 61% of ruling parties supporters said they approve of the move, while 28% of this group said they do not. Meanwhile, 45% of independents said they are in favor of the idea while 35% said they are opposed. Opposition party supporters were split with 43% saying they are in favor of the initiative and 43% saying they are not.

Asked if the international community should place more importance on dialogue with North Korea or on pressure to resolve the issue of North Korea’s nuclear weapon tests and missile launches, 47% of all respondents said “dialogue,” outnumbering the 40% who favored “pressure.” These results mark a reversal from those in the March 2019 poll where 45% of respondents said “pressure” and 41% said “dialogue.”

Support for the Abe cabinet was 55%, essentially unchanged from the 54% recorded in the previous poll (conducted on April 26–28). The nonsupport rate was 32% (31%). Respondents were split in their views on the Abe cabinet’s economic policies with 41% saying they “approve” of them and 43% saying they do not. In the poll conducted in August 2018, 48% of pollees said they “approve” of the cabinet’s economic policies while 38% said otherwise.

The political party support rates were as follows: Liberal Democratic Party, 42% (previous poll: 40%); Constitutional Democratic Party of Japan, 4% (4%); Komeito, 4% (3%). Some 41% of pollees said they do not support any particular party (40%). (JMH created and added line graph.)

[Polling methodology: The nationwide survey was conducted on May 17–19 on a computer-aided random digit dialing (RDD) basis and targeted voters aged 18 or over with calls placed to landline and mobile phone numbers. Valid responses were received from a total of 1,063 persons, including 534 persons (out of the 934 households with one or more eligible voters) for landline numbers and 529 persons (out of the 1,195 persons who answered) for mobile numbers. The valid response rates were 57% for landline numbers and 44% for mobile numbers.] 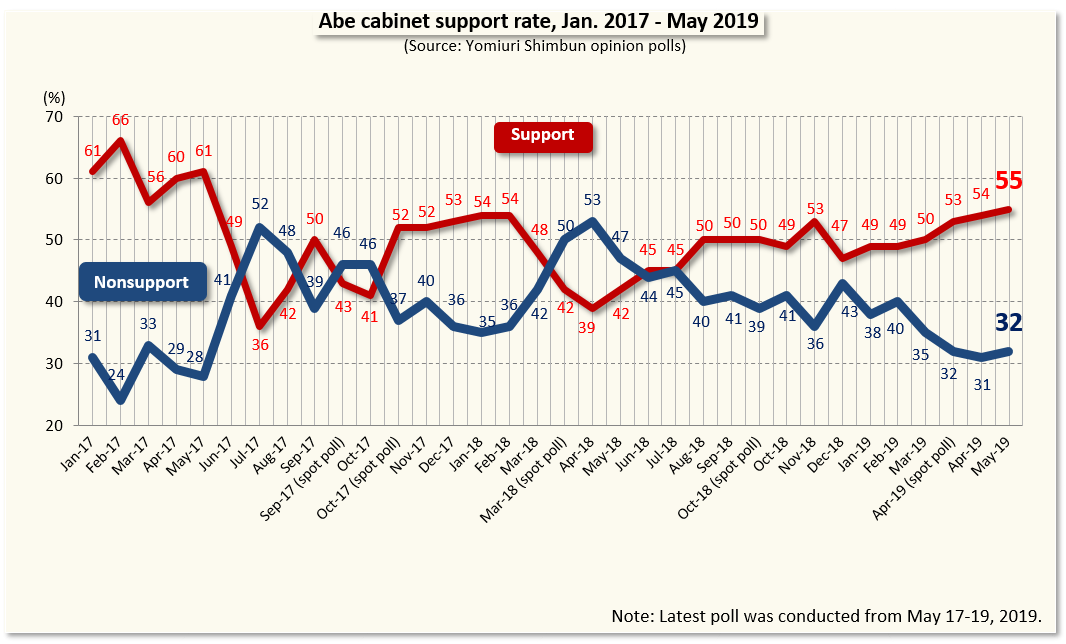