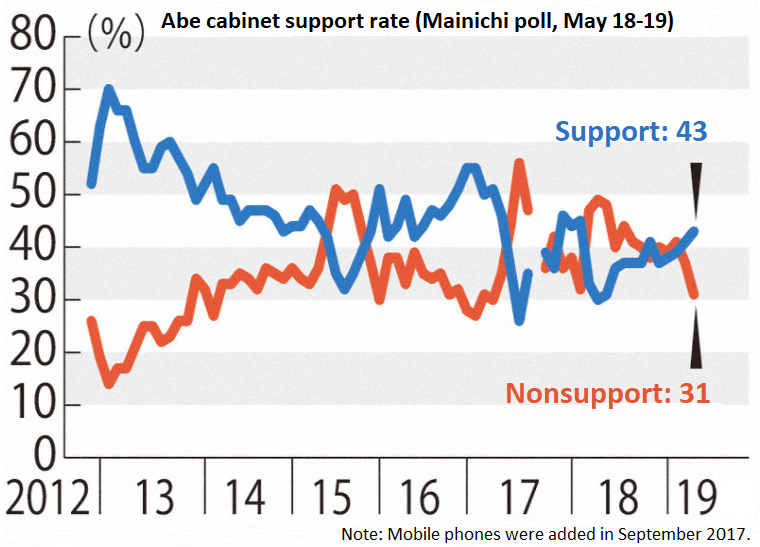 TOKYO — More than 70% of respondents to a weekend Mainichi Shimbun survey said they have positive feelings toward Emperor Naruhito, who ascended to the throne on May 1 following his father Emperor Emeritus Akihito’s abdication the day before.

In the nationwide telephone survey conducted on May 18 and 19, the most common answer to a question about their feelings toward the new Emperor was that they have “a favorable impression” at 34%, followed by “an affinity” at 27%, “reverence” at 9% and “a sense of awe” at 3% — coming to a total of 73%.

Meanwhile, 10% of respondents said they do not harbor any particular feelings toward the Emperor, while 5% said they are not interested and 1% said they have an antipathy. Three percent gave other answers.

The survey also queried about the respondents’ feelings toward Emperor Emeritus Akihito. Some 28% of respondents said they have “a good impression,” forming the largest group, followed by 24% citing “an affinity,” 21% answering “reverence” and 4% “a sense of awe.”

In a similar questionnaire carried out in March 1989, just months after then Emperor Akihito’s enthronement, 29% of respondents said they held “a favorable impression” toward His Majesty, while another 29% said they had “an affinity,” 6% answered “reverence” and 2% cited “a sense of awe.”

In that poll, some 34% of respondents said they had a “favorable impression” toward then Crown Prince Naruhito, followed by 20% citing “an affinity,” 4% answering “reverence” and 1% “a sense of awe.”

Because the 1989 poll was conducted in the form of a face-to-face interview, its results cannot be simply compared to those of the latest poll. However in both surveys, those feeling positive toward the then emperor formed the largest group of respondents.

Then Emperor Akihito’s retirement marked the first Imperial abdication in 202 years. As the Imperial House Law does not stipulate abdication by an emperor, the government enacted a special one-time law allowing for Emperor Akihito to abdicate. With regard to future systems, 43% of respondents to the latest survey said the Imperial succession should be judged on a case-by-case basis, followed by 41% who said the system should be changed so future emperors can also abdicate. Some 1% of respondents said an emperor’s abdication should not be approved.

When asked about the outlook of the Japanese economy in the new Imperial era of Reiwa, which was ushered in on May 1, 37% of pollees said they harbor hopes for economic prospects, while 40% said they don’t.