TOKYO — Japan will streamline policy coordination among government agencies in a bid to expand food exports, according to sources.

Japanese exports of agricultural, forestry and fishery products and processed food are expected to hit 1 trillion yen ($9 billion) by 2020. The government wants to increase this to 5 trillion yen by 2030, from 906 billion yen in 2018.

But public awareness of food safety is growing worldwide, posing challenges to Japanese exporters as countries impose stricter controls on what they put on their tables.

Relevant Japanese agencies — namely, the Cabinet Secretariat, the Ministry of Health, Labor and Welfare and the Ministry of Agriculture, Forestry and Fisheries — will identify problems hindering export growth and set a timetable for solving them.

The government will also strengthen food safety standards as a part of an economic policy package due to be released this summer. Measures like prodding the food industry to comply with international certification standards and increasing bilateral talks with other countries about import regulations are expected to be introduced.

Even with these measures, however, Japan will not become a major agriculture exporter, according to Marcel Thieliant, senior Japan economist at Capital Economics. “Japan will never be an agricultural powerhouse simply due to land constraints,” he said, noting that Japan has just 1% the arable land of Australia. 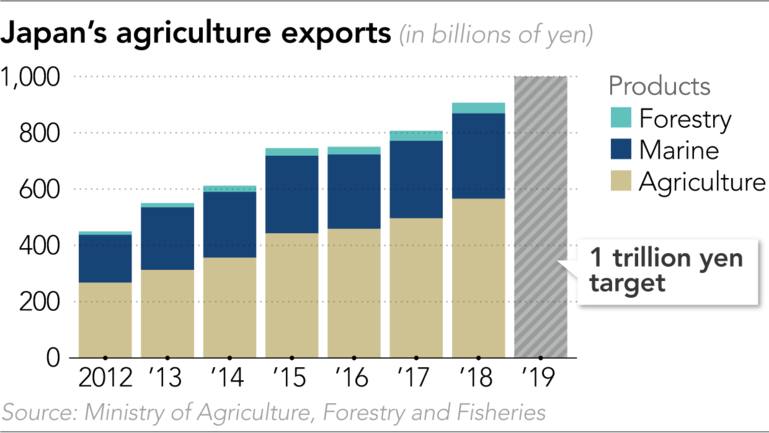 Food coloring additives made from gardenia and safflower are common in Japan, but are widely banned in the West, cutting into exports of Japanese confections and beverages. Japan could export up to 34.7 billion yen worth of processed food to the U.S. and 5.4 billion yen worth to the EU if countries lifted these bans, according to estimates from the Cabinet Secretariat.

Exacerbating these problems is the fact that while many countries have just one agency for setting food safety standards, Japan divides this task between multiple agencies.

For example, the health ministry regulates food distributed in Japan, including imports, but has nothing to do with food exports, nor does it support exporters. The agriculture ministry negotiates with other countries on easing import regulations to allow more Japanese goods, and also helps domestic companies bring their facilities up to international standards.

This division complicates the goal of increasing food exports. The agriculture ministry cannot ask another country to lift a ban on a Japanese product if the health ministry is banning a similar product from the same country. Trade negotiations become more difficult when Japanese ministries are not on the same page.

Still, it may take more to increase exports as countries continue to express concern over the effects of the 2011 Fukushima Daiichi nuclear plant disaster. The World Trade Organization recently upheld South Korea’s import ban on Japanese seafood from regions thought to be affected by radiation, putting a damper on Tokyo’s near-term strategy to grow exports.