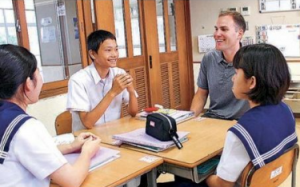 Ryukyu Shimpo wrote that an event was held on May 10 at a junior high school in Ie Village, Okinawa, during which U.S. Marines stationed there interacted with local students through English conversation lessons. Since last year the school has been inviting Marines to take part in a series of lessons to improve the English ability of its students. According to the paper, eight Marines participated in the event on May 10. It quoted one of the Marines as saying that the lessons have provided the students with a good opportunity to learn everyday English while at the same time allowing the service members to learn about Japanese culture. A student who aspires to become an English teacher expressed his gratitude by saying he hopes the Marines will continue to visit the school because he learns a lot from their lessons.