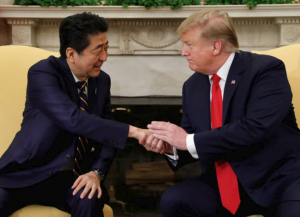 Questions and criticisms have been raised as to the merits of Prime Minister Shinzo Abe’s approach to the Trump administration. He will have the honor of being the first foreign leader to greet the newly enthroned Reiwa Era emperor. U.S. President Donald Trump’s visit will also include the presentation of an American made sumo trophy at the spring sumo tournament, and a likely tour and the accompanying photo opportunity on the newly refurbished Izumo aircraft carrier.

Critics argue that it is inappropriate to bestow these privileges on Trump considering the White House’s criticism against Japan, the mercurial behavior of the president himself and the instability he has inculcated into the alliance, the region and the world with his lighthearted and sometimes inflammatory tweets.

Still others assert that the U.S. initiated trade war with China and steel tariffs on Japan are further evidence that Trump has damaged Japan’s national interests, potentially sending the Japanese economy back into recession.

These criticisms are legitimate yet leave us with the following question: What are the alternatives for Japan as its closest partner is in the process of re-inventing itself under the leadership of the most unorthodox leader in U.S. history?

At the first level, what is clear is that Japan under Abe has prioritized as its national interest the maintaining of the U.S.-Japan alliance as the cornerstone of its security strategy. At the same time, Tokyo has doubled down on its long-term efforts to expand its strategic partnerships within the region and outside the immediate Indo-Pacific region both in terms of quality but also quantity.

The deepening of India-Japan, Vietnam-Japan, Australian-Japan partnerships as well as with other partners in the region has garnered Japan friends and importantly from policymakers and scholars in ASEAN, but also India and Australia.

A recent survey conducted by the Institute of Southeast Asian Studies in Singapore found that all ASEAN countries want much more of Japan, not less, and that Japan is seen as a reliable friend to the region. Australia’s re-elected prime minister, Scott Morrison, also echoed this sentiment by recognizing Abe’s leadership in a recent interview stating that Abe’s approach to balancing Japan’s relationship with the U.S. and China has been instrumental in shaping his own views of how Australia can maneuver between is most important partners.

While regional partners are crucial in securing Japan’s national interests, Abe has also strengthened economic, security and diplomatic bonds with EU members collectively and at the bilateral level. He has also strengthened relations with Canada, New Zealand and the Pacific Island nations ensuring they act more cohesively to maintain an international order that has brought prosperity and peace to Japan.

In terms of strategy, Abe formulated a multilevel approach to ensuring that the above national interests are achieved. Through correctly ascertaining that a conflictual or demeaning relationship with Trump will result in hardline, bullying tactics by the president, Abe has chosen to flatter and to engage in bilateral relations that resonate with the “America First” mantra Trump used during the election and now as president.

How well has Japan executed this strategy? Arguably, Abe is Trump’s most trusted foreign leader and a confident on issues in the Indo-Pacific.

Japan has also targeted investment in the U.S. to demonstrate Japan’s commitment to “making America great again,” expanded the quality and quantity of joint exercises within the Japan-U.S. alliance, increased the “face-time” of Japanese politicians, business people and defense officials in Washington, and supported the Trump administration’s signature diplomatic initiatives such as his diplomacy with North Korea, the emerging Indo-Pacific strategy/vision, and reforming the World Trade Organization.

Furthermore, Tokyo has played an essential role in bringing states within the region together in forums such as the Quadrilateral Security Dialogue, advocating and continuing the Malabar exercises between Japan, India and the U.S. and provided the initial leadership on the Free and Open Indo-Pacific vision (FOIP).

These efforts have helped Japan avoid most of the ire of other countries that have been targeted by the Trump administration. The alliance has deepened, and polls show that public support for the Japan-U.S. alliance remain high while they hold reservations about Trump himself.

Notwithstanding, there are challenges ahead as the U.S. pushes Japan toward some kind of trade agreement.

Japan needs to also navigate an increasingly likely protracted U.S.-China trade war and the likely bifurcation of technology infrastructure into an open, U.S.- led system and a closed China system. With China being Japan’s largest trading partner and having security challenges in the East China Sea and South China Sea, this will be a difficult tightrope to walk.

The “brave new world” that Japan has had to navigate under the Trump administration has not been one of subservience or lack of opportunity. Abe has continued to engage in diplomacy with Russia to find a compromise over the Northern Territories despite the toxic relationship between Washington and Moscow.

Tokyo has also just hosted a visit by the Iranian envoy regardless of the increased U.S.-Iran tensions and Japan has even agreed to third country infrastructure building with China (although not part of the “Belt and Road” initiative) despite U.S. criticism that the BRI is a geoeconomic strategy to purge U.S. influence from the region.

Even after the disappointment of the Trump administration’s withdrawal from the Trans-Pacific Partnership and Trump’s venomous criticisms against multilateral free trade agreements, Abe not only pushed to completion of the TPP, but also the Japan-EU Economic Partnership Agreement, doubling down on Japan’s commitment to multilateral trade.

Unorthodox leadership and policies from Washington have also provided Japan opportunities for regional and global leadership. The above-mentioned trade agreements are significant but so is Japan’s commitment to the Indo-Pacific region and forging a consensus with like-minded states on what form and basis the most important economic and strategic region will evolve. Wisely, Japan has resisted contributing to a regional order through the FOIP, which excludes China.

With two to six years left of a Trump presidency, Abe and his successors will have to continue to manage the unpredictable geopolitical forces that have been aggravated by Trump. What is clear is that these forces are here to stay, with or without Trump, and any strategy to maximize Japan’s national interests will need to be based on investing in existing institutions such the Japan-U.S. alliance but also being a significant stakeholder in emerging ones such as FOIP, a reformed WTO or an expanded TPP.

Stephen R. Nagy is a senior associate professor at the International Christian University and a visiting fellow with the Japan Institute for International Affairs..