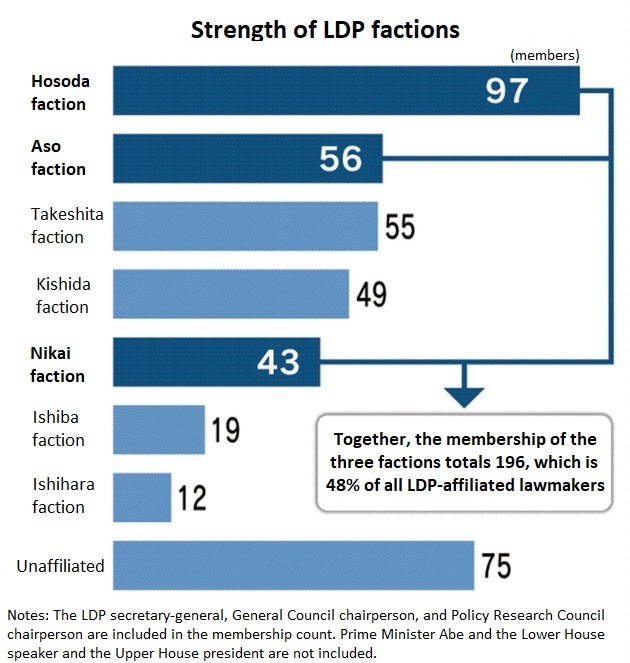 On May 21, the Liberal Democratic Party’s Hosoda faction held a political fundraising party at a Tokyo hotel. Prime Minister Shinzo Abe hails from this faction. The Hosoda faction alongside the Aso and Nikai factions play central roles in supporting the administration. The idea of making it possible for the Prime Minister to serve four consecutive terms and the idea of a “double election” of the Lower House and Upper House on the day of this summer’s Upper House election come from these three main factions. With their large memberships and powerful information, they may influence the “post-Abe” era.

The Prime Minister has expressed his affinity with LDP factions by giving remarks at their fundraising parties. At the Aso faction gathering on May 14, Abe described the faction as the “core of the cabinet.” At the Nikai faction gathering on May 9, Abe introduced faction Chairman and LDP Secretary-General Toshihiro Nikai as the “main pillar (of the party).” At the Kishida faction gathering on May 15, however, Abe gave a less exuberant description of LDP Policy Research Council Chairperson Fumio Kishida, describing him as “playing a central role in the LDP’s policymaking.” Abe thereby made a distinction between the Kishida faction and the Aso and Nikai factions.

The three main factions also have power in numbers. The Hosoda faction has 97 members, making it the largest faction in the LDP. Next is the Aso faction at 56. Adding in the 43 members of the Nikai faction, the three factions have a total of 196 members, almost half of the lawmakers affiliated with the LDP.

Both Deputy Prime Minister and Finance Minister Taro Aso and Nikai are elderly at 78 and 80, respectively. This makes them unlikely as candidates for the “post-Abe” era. The Aso faction has Foreign Minister Taro Kono, but Aso has indicated that it is “still early for him.” The Hosoda faction also does not have a leading contender for next prime minister. For the Prime Minister, this is the key foundation supporting his own administration.

The three main factions are the first to release information. Speculations of a double election spread after LDP Executive Acting Secretary-General Koichi Hagiuda of the Hosoda faction mentioned on April 18 the possibility of postponing the consumption tax hike and dissolving the Lower House. The two-hour conversation that Aso had with the Prime Minister at his private residence on April 30 gave impetus to this. It was the Nikai faction that started talk of making possible a fourth term for Abe.

Partnership with the three main factions is important to “post-Abe” candidates as well.

Takeshita faction members making an appearance at the Hosoda faction party included faction Executive Acting Chairperson and Minister of State for Economic and Fiscal Policy Toshimitsu Motegi and LDP General Council Chairperson Katsunobu Kato. Kato said in his remarks, “The Hosoda faction is the party’s largest and has a truly dominant presence.” The Takeshita faction has good relations with the three main ones. Motegi and Kato as well as former Minister of Economy, Trade and Industry Yuko Obuchi all hope to run for party president.

Kishida also attended the Hosoda faction party and praised the faction, saying, “We also held a party at this same venue, but this party is more lively.” The Kishida faction has a complex relationship with the Aso and Nikai factions.

Kishida did not join the backing for the LDP-endorsed newcomer who was put forward by Aso in the April Fukuoka gubernatorial race. It is thought that Kishida did this out of consideration for Kishida faction Emeritus Chairman Makoto Koga, who was backing the incumbent. Aso made an appearance at the Kishida faction party on May 15 but left without giving remarks.

When independent Goshi Hosono joined the Nikai faction, Kishida clashed with Nikai because Takeru Yoshikawa of the Kishida faction was also in the Lower House Shizuoka No. 5 district like Hosono.

Shigeru Ishiba, who ran against Prime Minister Abe in last year’s LDP presidential race, did not make an appearance at any of the parties of the three main factions. The Prime Minister did not attend the Ishiba faction gathering on May 13. LDP Health, Labor and Welfare Division Director Shinjiro Koizumi, who is not affiliated with any faction but voted for Ishiba in the presidential election, has not done anything noteworthy in relation to the faction parties.