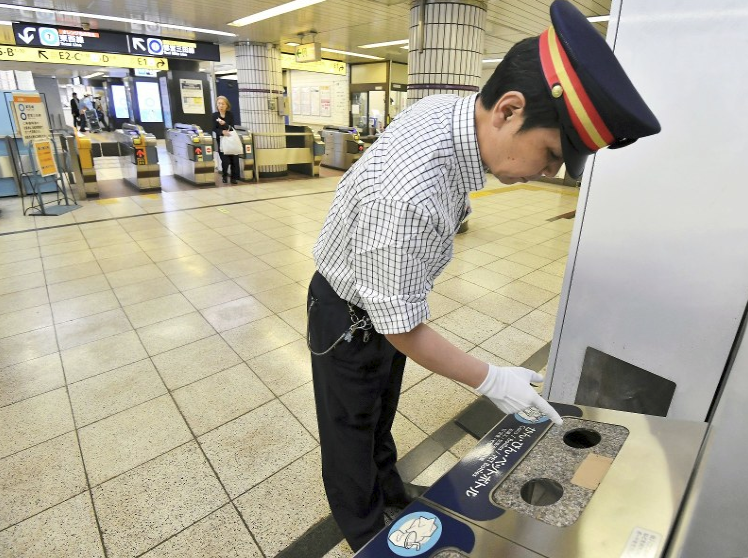 In preparation for President Trump’s visit to Japan, a Tokyo Metro employee checks the garbage cans during his patrol at Otemachi Station. (Chiyoda Ward, Tokyo on May 22)

The Tokyo Metropolitan Police Department (TMPD) is beefing up security in Tokyo ahead of U.S. President Donald Trump’s visit on May 25–28. President Trump will be Japan’s first state guest in the Reiwa Era, and security will be on the highest level as it was at the time of the President’s previous visit a year and a half ago. There are some challenging aspects to it, including security for the President while he watches the sumo tournament, but the Metropolitan Police Department will be flawlessly prepared. Certain aspects, such as traffic restrictions, are also likely to impact Tokyo residents.

What is causing the TMPD the most trouble is the President’s sumo viewing on May 26. At Ryogoku Kokugikan, the seats reserved for distinguished guests are on the second floor, but President Trump is scheduled to view the matches from a masu-seki box seat near the ring as he will also present an award to the wrestler who wins the tournament. The seating at Kokugikan is configured in an inverse cone shape, and the masu-seki are located at the bottom. The President’s viewing of sumo, therefore, presents an increased security risk because it will require security not just from all sides but also from above.

In addition to requiring purchasers of masu-seki to register their names and other information, some ringside seats are not being sold. May 26 is the final day of the May Grand Sumo Tournament and so it is anticipated that spectators may throw their cushions after the match that decides the victor. [It is a tradition in sumo for spectators to toss their cushions toward the ring in the event of an upset, for example.] The TMPD will station security police (SP) and others in such a way that cushions do not hit the President or his entourage.

President Trump is coming to Japan as a state guest, and so an Imperial banquet in addition to an audience with His Majesty the Emperor will be held. The TMPD is heightening security not only at the U.S. embassy and other U.S.-related facilities but also in areas surrounding the Imperial Palace and the Akasaka Estate. The police are increasing patrolling and traffic checks.

The East Gardens of the Imperial Palace is usually open to the public, but the Imperial Household Agency has closed them from May 26 to noon on May 28. This has not been done since then-U.S. President Barack Obama visited in April 2014.

The police are also taking measures related to drones. Drone-like flying objects were spotted flying near the Imperial Palace on May 2 and 6. The TMPD has put the “unmanned aircraft countermeasures squad” of its Riot Police Unit on call and will block illegal flights by using “jamming” devices, which obstruct the flying of drones. Moreover, the initial response squad in times of emergency, a counterterrorism squad that carries submachine guns, will be deployed at President Trump’s various destinations.

President Trump is scheduled to play golf with Prime Minister Shinzo Abe in Chiba Prefecture on May 26 prior to watching sumo. A top official at the Chiba Prefectural Police Department comments: “This is security for the President, so we of course will ensure our readiness is at the highest level.”

Measures have also been launched at airports and other places where large numbers of the general public gather. At the passenger terminals of Haneda Airport, the use of coin lockers is gradually being suspended and garbage cans will be taken out of service from May 25. Tokyo Metro has already started similar measures at its major stations. From May 25, East Japan Railway [JR East] will also suspend operation of coin lockers at Tokyo Station and Ryogoku Station, which serves Ryogoku Kokugikan, where the sumo tournament is being held. The TMPD aims to deter crime through “visible security” by increasing patrols by police officers.