The Fugaku, a nickname for Mt. Fuji, aims to be about 40 to 120 times faster than the K, the first supercomputer in the world to achieve a speed of over 10 quadrillion computations per second. 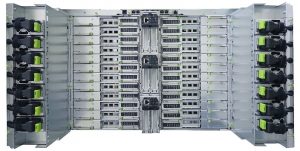 “A supercomputer is essential to solving social challenges such as drug development and disaster prevention,” Riken President Hiroshi Matsumoto said. “We will dedicate our best effort to its success and operation.”

The new supercomputer, developed at a cost of about 110 billion yen ($999 million), will be utilized in a wide range of research by various companies and universities including forecasting heavy rains.

The institute received nearly 5,100 entries for potential names between February and April from the public, with only two entries for Fugaku.

The new computer will be placed in the institute’s Center for Computational Science in Kobe, replacing the K when it retires in August.

The United States and China have both revealed plans to release supercomputers with equal computing ability to the Fugaku in 2020 or 2021.

In June 2011, the K, which refers to the way 10 quadrillion is written in Japanese, ranked first in the world in computing speed, going into full-scale operation in September 2012. It fell to 18th place in the most recent rankings reported in November last year.