Young generation supports Abe cabinet because “it is better than others” 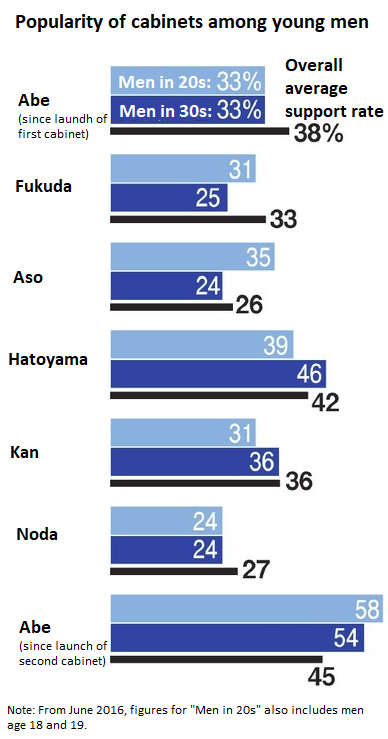 Compared to the middle-age and elderly age groups, young men strongly support the Abe cabinet. In contrast, support among women and the elderly is comparatively low. This has been a unique feature since the launch of the second Abe administration. According to the Asahi Shimbun’s (telephone-based) public opinion poll taken in May, the overall cabinet support rate was 45%. Among young men, however, it was high, at 54% among men aged 18–29 (women: 38%) and 57% among men in their 30s (39%). This is the exact inverse of the cabinet support rate during the first Abe cabinet (2006–07), where support was low among the young generations and high among the middle-age and elderly age groups.

Asked why they support the second Abe cabinet, however, more than half (51%) said “because it is better than the rest.” This kind of passive support has become the norm in recent years.

Waseda University Associate Professor Masahisa Endo, who specializes in voting behavior and analyzes political awareness in society, comments: “The younger the man, the greater his anxiety over the economy. This is why that group has great interest in economic policy, and this affects their priorities in voting.”

He continues, “If there were an alternative, voters would be able to deliver a verdict.” Unless the opposition parties and those within the LDP who are not fond of Abe develop more draw among the public, the pull of Abe’s lengthy administration will continue to be strong.

Prime Minister Abe is closing in on becoming Japan’s longest serving prime minister thanks to the support he has.

Will his draw among voters widen further or narrow? The Upper House election will be a milestone that sets his future. (Abridged)