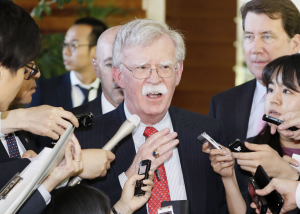 During the meeting at the premier’s office in Tokyo, Abe told Bolton that he welcomes Trump’s “historic” visit from Saturday as a state guest and expressed hope of strengthening the bilateral alliance, according to the Japanese government.

During his stay in Japan, Trump will meet with Emperor Naruhito, who took the throne on May 1, and hold talks with Abe on Monday.

Trump is looking forward to having “productive” discussions on a range of “very important issues” at the summit, Bolton told reporters after the meeting with Abe.

“President Trump is deeply honored to be the first visitor of state to meet the new emperor, very much looking forward to it,” Bolton said.

Abe and Bolton agreed on the importance of maintaining U.N. Security Council resolutions to achieve a complete denuclearization of the Korean Peninsula and confirmed close coordination in resolving the past abductions of Japanese nationals “at an early date.”

Abe has expressed a willingness to meet with North Korean leader Kim Jong Un without preconditions, a shift from his previous stance that any summit should yield progress on the abduction issue.

In Tokyo, Abe and Trump will likely take up the issue of North Korea following its recent missile launches. Trade is also seen as high on the agenda as bilateral negotiations are under way.