Emperor, Empress bid farewell to President Trump at his hotel 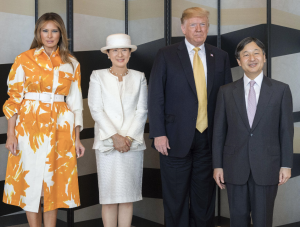 NHK, NTV, and Kyodo News reported that Emperor Naruhito and Empress Masako visited the hotel in Chiyoda Ward, Tokyo, where President Trump was staying after 9:00 a.m. this morning to say goodbye to him and the First Lady. They were met at the entrance by Ambassador and Mrs. Hagerty. The President reportedly repeatedly expressed his gratitude for the hospitality he was afforded and invited the Imperial couple to visit him at the White House. Kyodo noted that it is customary for the Imperial couple to greet state guests on the last day of their stay in Japan. TBS aired a similar story.