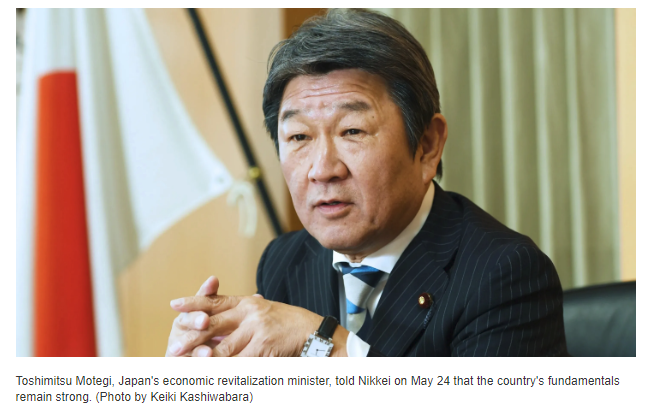 TOKYO — Japan’s economic and fiscal policy minister on Friday maintained that the conditions underlying consumer spending in the country remain strong, even as a government report sounded a weaker tone on exports and industrial output.

“The fundamentals of domestic demand, which accounts for the majority of the Japanese economy, are solid,” Toshimitsu Motegi told Nikkei in an interview.

In its latest monthly economic report, released the same day, the Cabinet Office maintained its stance that the economy is “recovering at a moderate pace,” citing steady improvement in the jobs market and corporate earnings growth. But it tweaked the wording around this phrase, in what amounted to a downgrade of its view.

While the April assessment saw weakness “in some sectors” of exports and industrial production, the May report left out that qualifier and said that such weakness “continues.”

The May report had been a focus of interest ahead of its release, which followed the first downturn in more than six years for a government index of business conditions. The Cabinet Office has described the economy as “recovering” every month since July 2013.

The May report did warn in its short-term outlook that economic “weakness remains for the time being,” a small downgrade from previous month’s phrasing, as the trade war between the U.S. and China looms over Japan’s exports and industry.

In terms of the risks posed by the trade war, Motegi sounded confident about the ability of Japanese companies to cope, given that they have production bases spread beyond China — in Japan, Southeast Asia and North America.

“Japan’s supply chains have diversified quite a bit,” said Motegi, who doubles as the government’s point man in trade negotiations with the U.S.

Japan is thought to be in an economic recovery dating back to December 2012, the longest streak since the end of World War II. “I don’t think that has ended,” Motegi told reporters Friday.

But Motegi said the Cabinet Office’s monthly economic report focuses on the size of the economy and employment, while the business conditions index places more weight on industrial output.

“The economic pie is growing steadily,” the minister said in the interview. Japan’s nominal GDP reached a record 550 trillion yen ($5.02 trillion) for the fiscal year ended in March. The larger economy means higher corporate profits and household incomes, he said.