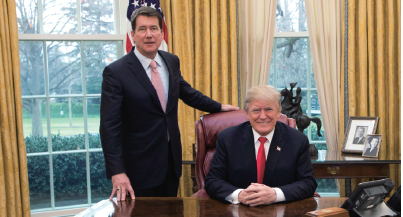 Ambassador William Hagerty meets with President Donald Trump in the Oval Office of the White House in December 2017. (WHITE HOUSE)

We find ourselves at a historic moment for both Japan and the U.S.-Japan relationship. At the beginning of this month, we joined our Japanese friends in celebrating the dawn of the Reiwa Era, and now we have the great honor of welcoming U.S. President, Donald Trump, back to Japan as the first official foreign guest of His Majesty Emperor Naruhito.

This is a time for celebration and for optimism. The partnership between the United States and Japan has never been stronger. This strength is reflected in the personal friendship shared by the President and Prime Minister Abe, the frequency with which they meet, and their close alignment on our shared values and objectives.

Though an ocean separates our countries, we are united in our belief in individual freedom, democracy, economic liberty, the rule of law, and respect for human rights. It is this common foundation of fundamental values that makes the U.S.-Japan relationship truly special and empowers us to achieve so much together in the Indo-Pacific region and around the world.

Through our partnership, our countries promote peace and stability. We stand in complete alignment on our approach to regional threats and challenges and on our efforts to ensure a free and open Indo-Pacific area. More specifically, we continue our work to address the threat posed by DPRK through diplomacy and to respond to Chinese assertiveness in the South and East China Seas.

Just as we coordinate on security, the United States and Japan cooperate to enhance our mutual prosperity. Our nations share a robust relationship of cross-border investment that generates hundreds of thousands of jobs in both countries. The President has adopted tax, trade, and regulatory policies that are pro-business and pro-growth, creating fertile ground for Japanese companies to further invest in the U.S. market. Similarly, we continue to seek new avenues to facilitate market entry in Japan by innovative American companies, and we have an opportunity to create a stronger, more reciprocal trade relationship through the bilateral negotiations that are presently underway.

As the Tokyo 2020 Olympic and Paralympic Games approach, we are channeling that excitement to deepen our people-to-people connections through our shared love of sports. In the U.S. Embassy’s flagship “Go for Gold” program, we are sending American speakers, including Olympic and Paralympic athletes, to schools across Japan to talk about American culture and society.

I feel very fortunate to serve as U.S. Ambassador during the first visit to Japan by an American president during the Reiwa Era. I look forward to President Trump and Prime Minister Abe working together to further strengthen our enduring partnership.