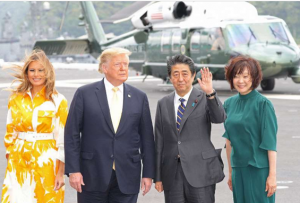 NHK broadcast live the visit by President Trump and Prime Minister Abe to the MSDF destroyer Kaga. In his speech to the 500 SDF and USFJ members gathered onboard the vessel, Abe pointed out that this is the first time in history for the U.S. president and the Japanese prime minister to board an SDF destroyer together. He stressed that the two leaders standing together on Kaga attests to the fact that the bilateral security alliance has never been stronger under their partnership and symbolizes the friendship between the two forces. He emphasized that the two forces are in total agreement on their mission to maintain a free and open Indo-Pacific as the cornerstone of regional peace and prosperity. He mentioned the plan to remodel the Kaga so that it can carry cutting-edge fighters onboard in order for the Japan-U.S. alliance to better contribute to regional security and stability. He paid tribute and expressed gratitude to the members of the SDF and the USFJ, as well as the President as commander-in-chief of the U.S. Forces, for their tireless efforts in support of the robust security alliance.

In his speech the President thanked all concerned for inviting him as Japan’s first state guest in the Reiwa Era and to visit the Kaga. He expressed sympathy for the victims of the stabbing incident in Kawasaki this morning on behalf of the American people. He noted that Yokosuka is the only place in the world where U.S. Forces and the navy of an ally are headquartered side-by-side and this in itself symbolizes the U.S.-Japan partnership and alliance. He highlighted Japan’s plan to purchase 105 F-35 stealth fighters for deployment on the Kaga and other vessels, making it the U.S. ally that will have the largest fleet of F-35s, which will contribute further to the security of both countries and to responding to the complex range of threats in the region and beyond. He thanked Abe for his commitment to strengthening Japan’s defense capability, which will also benefit the U.S.’s security. He expressed his gratitude to the men and women of the USFJ and the SDF. All commercial broadcasters also aired reports on the Kaga visit.