Prime Minister Shinzo Abe is scoring points for his diplomacy ahead of this summer’s House of Councillors election. At the Japan-U.S. summit meeting on Monday, he secured U.S. President Donald Trump’s understanding for a visit to Tehran as well as full cooperation on the abduction issue. However, there are still issues to be tackled. 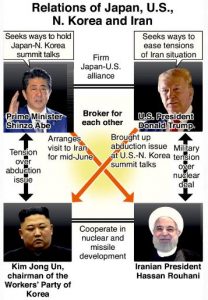 “I know for a fact that the prime minister is very close with the leadership of Iran,” Trump said at the beginning of the summit talks. “I do believe that Iran would like to talk.”

As Trump expressed his hopes for the Japanese leader’s planned visit to Iran, Abe looked satisfied and slowly nodded. The government aims for the visit to take place on June 12-14.

The government has been working to coordinate the prime minister’s visit to Iran since May 16, when Iranian Foreign Minister Mohammad Javad Zarif visited Japan. However, because the government did not know whether Trump would support the plan, it issued a gag order on discussing a possible Iran visit by Abe, and repeatedly denied the plan when asked by reporters. The government feared a backlash from Washington if the media reported the visit before Abe discussed it with Trump in person.

Abe explained the Iran visit to Trump on Sunday while the two were playing golf and watching sumo, and got the go-ahead. Relief spread within the government, with some believing that the prime minister’s close ties with the president helped to secure U.S. support.

Abe has been working to achieve progress in peace treaty talks with Moscow since the Japan-Russia summit talks last November, hoping to present it as one of his diplomatic achievements during the campaign for this summer’s upper house election. However, Japan and Russia remain at odds over the northern territories issue — the main agenda item in the negotiations — and prospects for concluding the talks remain unclear.

However, if Japan achieves results that would help ease tensions over issues related to Iran, which is a focus of world attention, “the prime minister can display his diplomatic clout to the international community ahead of the summit talks of Group of 20 [major economies] in June, which will also work to his advantage in the election,” a government source said of Abe’s intentions.

Abe also secured the desired response from Trump on the issue of abductions of Japanese nationals by North Korea.

The U.S. president met family members of the abductees after the summit meeting.

“I can tell you that [the abduction issue] is very much on my mind, and I can also tell you for certain that it is your prime minister’s primary goal,” Trump said at the meeting.

At the summit talks, Trump also expressed his full support for Abe’s desire to realize a Japan-North Korea summit between himself and Kim Jong Un, chairman of the Workers’ Party of Korea.

“In order to pave the way for a Japan-North Korea summit, Abe wanted to create an environment in which Pyongyang can no longer avoid the abduction issue if it wants to realize the third round of U.S.-North Korea summit talks,” a senior Foreign Ministry official said.

At Monday’s summit talks, Abe strongly conveyed that Tokyo and Washington are cooperating on the abduction issue, showing that his plans are going as intended.

Abe also offered to help broker a dialogue between the United States and Iran, which seems aimed at repaying Trump for his cooperation in resolving issues between Tokyo and Pyongyang.

However, it is unclear whether Abe’s diplomatic strategy will bear fruit.

Regarding Iran, the Trump administration denounces the nuclear deal and takes a different position from Japan.

At Monday’s press conference, Trump was asked whether the May 9 launch of a short-range ballistic missile by North Korea violated U.N. Security Council resolutions. He replied, “I view it differently,” revealing a difference in opinion from Abe.

Japan and the United States are still facing the major issue of new bilateral trade negotiations.

At the beginning of the summit talks, Trump implied that the talks could conclude in August and showed willingness to reach an agreement at an early date, while also showing consideration for Abe, who wants to avoid an outcome that would affect the upper house election this summer.

However, the two countries have very different aims and it is uncertain how much they can work out in a three-month time frame.

A Japanese government source said that Tokyo is wary of Trump’s next step, adding: “[The prime minister] only needs to hold out until after the upper house election in July. No agreement has been reached so far.”