Editorial: Abe must base diplomacy on principles, not following U.S. 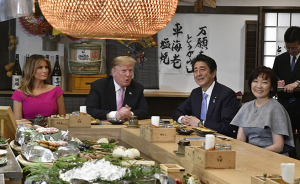 Prime Minister Shinzo Abe and his wife, Akie, host a dinner for U.S. President Donald Trump and his wife, Melania, at a “robatayaki” barbecue restaurant in Tokyo’s Roppongi district on May 26. (Pool)

Prime Minister Shinzo Abe held talks with U.S. President Donald Trump in Tokyo on May 27 for his 11th summit with the U.S. leader.

Trump was visiting Japan as the first state guest after Emperor Naruhito ascended to the throne on May 1.

The U.S. president is scheduled to visit Osaka in June to attend the Group of 20 summit. Since Abe visited the United States in April, the two will meet for three months in a row, which is unusual for summits between the leaders of two major nations.

Abe is probably seeking to parlay his close personal ties with Trump into political gains prior to the summer Upper House election.

Whenever a U.S. president visited Japan as a guest of the nation in the past, a joint statement by the leaders of the two countries was issued to announce their agreements.

When former President Barack Obama visited Japan in 2014, a joint statement was issued that declared the Japan-U.S. Security Treaty would be applied to the disputed Senkaku Islands in the East China Sea.

In 1996, when former President Bill Clinton came to Japan, a joint Japan-U.S. security declaration was issued that reconfirmed the importance of the bilateral security treaty in the post-Cold War era.

This time around, however, no joint announcement was prepared. As for the ongoing trade talks between Tokyo and Washington, the focus of discussions between the two leaders, they only confirmed their commitment to accelerating the talks for an early deal.

As Abe has stressed, the principal objective of inviting Trump to be the first foreign leader to meet the new emperor was to show off the strength of the bilateral alliance to audiences at home and abroad. It appears that diplomatic efforts to tackle pending bilateral issues were put on the back burner.

As a result, Abe staged a flurry of eye-catching events to flatter Trump.

On May 26, the day before their official talks, the two leaders played 16 holes of golf together during an outing in Chiba Prefecture and ate double cheeseburgers made with American beef for lunch.

In the evening, the two first couples watched sumo bouts at the Ryogoku Kokugikan in Tokyo, where Trump climbed onto the dohyo and presented a hefty trophy, the U.S. President’s Cup, to the winner of the 15-day tournament. Then, Abe entertained Trump and his wife, Melania, with dinner at a “robatayaki” barbecue restaurant in Tokyo’s Roppongi district.

There is every reason to treat a state guest well. But the way Abe showered Trump with entertainment was way over the top.

Socializing between national leaders should be diplomatic purposes. The question is how Abe’s charm offensive with Trump has served Japan’s diplomatic interests.

How did their talks actually go?

As the two leaders were about to start discussions on May 27, Trump, referring to the bilateral trade talks, said, “Trade-wise, I think we’ll be announcing some things, probably in August, that will be very good for both countries.”

After golfing with Abe, Trump tweeted, “Much will wait until after their July elections where I anticipate big numbers!”

These words suggest that Trump is trying to help Abe by avoiding putting strong pressure on Japan over trade so that the bilateral negotiations on agricultural issues will not affect the outcome of the Upper House elections.

In a joint news conference with Abe, however, Trump indicated that his administration would not be bound by the Trans-Pacific Partnership trade pact among Pacific Rim nations, which he has withdrawn the United States from.

Trump apparently has no intention of paying attention to Tokyo’s pledge not to make any concession beyond those made for the TPP agreement.

It is obvious that there are limits to the diplomatic effectiveness of Abe’s efforts to butter up Trump and build close personal ties with him.

With regard to policy toward North Korea, the two leaders agreed to cooperate to tackle the issue of North Korea’s past abductions of Japanese citizens. But Trump disagreed with Abe in how to view North Korea’s recent short-range missile tests.

Abe’s claim that Tokyo and Washington are in complete agreement over issues concerning North Korea appears to be an attempt to paper over their differences.

Since he took office, Trump has turned his back on multinational agreements, withdrawing from the Paris climate accord and other multilateral pacts. He has also taken a slew of steps that undermine efforts to maintain the world order, such as withdrawing from the Intermediate-Range Nuclear Forces Treaty and relocating the U.S. Embassy in Israel to Jerusalem.

Trump has also stood out among successive U.S. presidents in his lack of respect for traditional U.S. allies including those in Europe.

If Japan is seen as just trying to curry favor with Trump, it could lose credibility with the international community.

If Abe is proud of his strong personal ties with Trump, he should use the relationship to help restore international cooperation and rebuild the damaged frameworks for multinational efforts.

Abe’s planned visit to Iran, which he is seeking to schedule for mid-June, will be a major acid test of his diplomatic prowess.

Last year, Trump unilaterally withdrew from the Iran nuclear deal and stepped up pressure on Tehran. Enraged by the move, Iran has announced it will take retaliatory steps, causing an alarming rise in military tensions in the Middle East.

Japan, which has traditionally kept friendly ties with Iran, has a role to play. To make a substantial contribution to defusing the tension, however, Japan needs to also seek concessions from the United States, which is responsible for heightened tensions in the region. If it acts like a proxy for Washington, Japan will not be able to perform the role of mediator.

What should Japan do now by using what Abe describes as “unshakable bonds” between Japan and the United States to help achieve international peace and stability?

First, Abe should directly advise Trump against taking any step in the wrong direction.

Secondly, Japan should place the top foreign policy priority on multilateral cooperation based on rules in both economic and security areas.

Thirdly, it should anchor its diplomacy on such basic values as freedom, democracy, basic human rights and the rule of law.