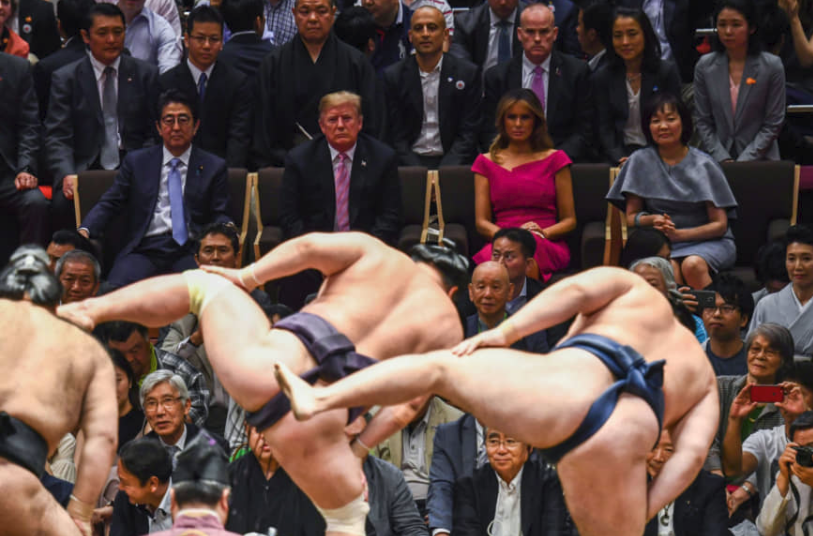 U.S. President Donald Trump’s attendance at the Summer Grand Sumo Tournament, and presentation of a large trophy to its winner, made headlines around the globe.

The attention of the world’s media, for a few hours at least, was focused on Japan’s national sport.

Although massively disruptive on the day in question, the visit is unlikely to have any long-lasting negative effect on sumo, and may even result in a small boost in fans in the United States.

Trump isn’t the first head of state to watch a sumo tournament, nor the first president to hand over a trophy in the ring, but the excessive security presence, and over-the-top restrictions put in place on the day, were illustrative both of the outsized importance of his office and the extreme emotions the man himself generates.

Any visit to sumo by a member of the Imperial family necessitates increased security, but nothing approaching the level of controls and checks at the Kokugikan last Sunday had ever been implemented.

Much has been made of the fact that sumo fans were those most negatively affected by the president’s presence.

As well as a reduction in the amount of available regular tickets, the number of same-day unreserved seats was cut in half, with the result that only those who had started queuing by 10 p.m. the night before were able to get in.

For fans that did attend, there were a number of differences too.

Cans and plastic bottles were banned, while any liquids in soft containers had to be sampled in front of security to prove that they weren’t dangerous substances.

Fans had to walk through metal detectors and have their bags searched on the way in, all the while being watched by the police and members of the U.S. Secret Service.

Facilities and services normally available at the venue were also curtailed or severely restricted.

The serving of chanko nabe (sumo stew) was canceled. Lockers and vending machines were closed up and sealed off. Breastfeeding and smoking areas were shuttered, and no one was allowed to enter or leave the arena between 4-6:30 p.m.

Due to fears that plastic bottles could be used as projectiles, the chaya (teahouses) were only allowed serve their customers using paper cups.

Fans chafing at long delays and other inconveniences vented online, while others avoided the event entirely.

Some, however, saw positives in the day.

NHK color commentator Ken Swensen compared it to the “ping-pong diplomacy” of the 1970s, and while Japan and the United States already had a close relationship, Prime Minister Shinzo Abe’s efforts to ensure that Trump relaxed and enjoyed himself during several days of trade talks represented a sound strategy.

As I detailed in this column on May 9, the use of sumo for political purposes isn’t anything new. If Japan gets a favorable result in the aforementioned discussions, few will complain about the disruption Trump’s visit to the Kokugikan caused.

The sport itself is likely to get a slight bump in popularity in Trump’s home country, as would any sport that received this level of media attention.

It’s hard to say how many of Trump’s supporters will decide to come and see sumo for themselves, especially as the percentage of people with passports is famously lower in areas where his support is strongest, but walk around the second floor of the Kokugikan any day during a tournament and you’ll see far higher numbers of foreign tourists than five or 10 years ago. Most of that is a result of the increased exposure sumo has received in this paper and elsewhere.

The tone of coverage the presidential visit received will also help.

American politics and its related media coverage are notoriously sectarian, which often means that anything associated with one side automatically becomes anathema to the other.

While there were a few partisan journalists who couldn’t resist the low hanging fruit of sumo and weight-related mockery of Trump (or his opponents), reports on the sumo itself were for the most part respectful and surprisingly accurate.

It’s a long-standing issue that coverage of sumo in Western media tends to be filled with inaccuracies and urban myths. Part of the problem is that news organizations get their information from Japan-based correspondents whose main beats are politics or pop culture, and who often know little more about the sport than their editors back home.

This time, most press organizations did their homework, and — apart from a few minor errors — gave an accurate account of what transpired on the day and how it differed from regular tournaments.

Even in the United States, reports in certain media outlets not normally known for a close relationship with the truth were surprisingly on the button.

The fact that everything went smoothly on the day for those involved, and that tradition (with a few notable exceptions) was observed and respected, certainly helped.

Although only a few short clips were shown, the ferocity of the action in the ring, combined with the pageantry outside it, is sure to have piqued the interest of many watching for the first time.

That’s nothing new. The reality of sumo is so far removed from common misconceptions that it takes just one viewing for people to be hooked.

While events in North Korea and on Twitter soon shoved it off the front page, the positive coverage sumo received over the course of the weekend more than outweighed criticisms of the arrangements put in place and concessions made.