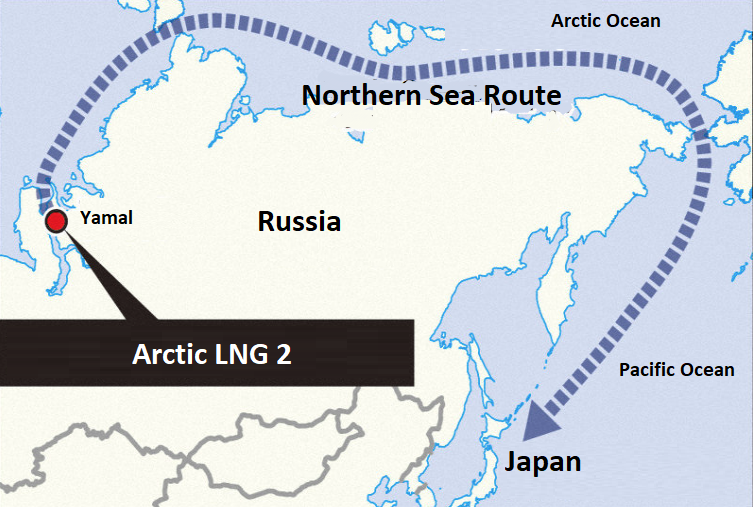 By Hajime Nakatsugawa and Kenji Wada

Mitsubishi Corporation, Mitsui & Co., and Japan Oil, Gas and Metals National Corporation (JOGMEC) are mulling investing in a liquefied natural gas (LNG) project being developed by Russia in the Arctic Circle, it was learned on May 30. It looks like a basic agreement will be reached with the Russian side as soon as early June.

If the plan is realized, it will be the first time for Japan to supply LNG from an interest via the Northern Sea Route (NSR). In addition to offering public-private sector support for Russian resource development, the project would secure for Japan a stake in an LNG project and diversify the nation’s procurement sites for energy resources.

The project is “Arctic LNG 2,” which is being developed by Russia’s largest privately owned gas producer Novatek near the Yamal Peninsula in the Arctic Circle. The project is scheduled to go online in 2023, and total project costs are on a scale of between 3 and 4 trillion yen. Novatek will invest 60% and is soliciting foreign companies to put up the remaining 40%.

Earlier this year, two Chinese companies each acquired a 10% stake, and French oil and gas company Total also bought a 10% stake in the project. Japanese trading companies and the Saudi Arabian national petroleum company were in negotiations for the remaining 10%.

The total Japanese investment would be between 300 and 400 billion yen. Of that, Mitsubishi Corporation and Mitsui & Co. would invest a maximum total of about 100 billion yen, and the remaining would be put up by JOGMEC.

The project’s annual LNG production capacity is about 19.8 million tons, which is about twice the capacity of “Sakhalin 2,” a project that Mitsubishi and Mitsui are already participating in.

The LNG produced would be transported by tanker through the Arctic Ocean to Japan, and there are also plans to sell some LNG to China, India, and Thailand among other nations. The ice covering the Arctic is starting to melt due to global warming, making possible resource development and maritime transport in the region.

The government hopes to highlight the investment at the Japan-Russia summit to be held on the fringes of the Osaka G20 summit in June.

In the past, however, Mitsui and Mitsubishi were forced by the Putin administration to reduce their investment in the Sakhalin 2 project. Moreover, the possibility of the project being subject to the economic sanctions imposed on Russia by the United States cannot be ruled out.