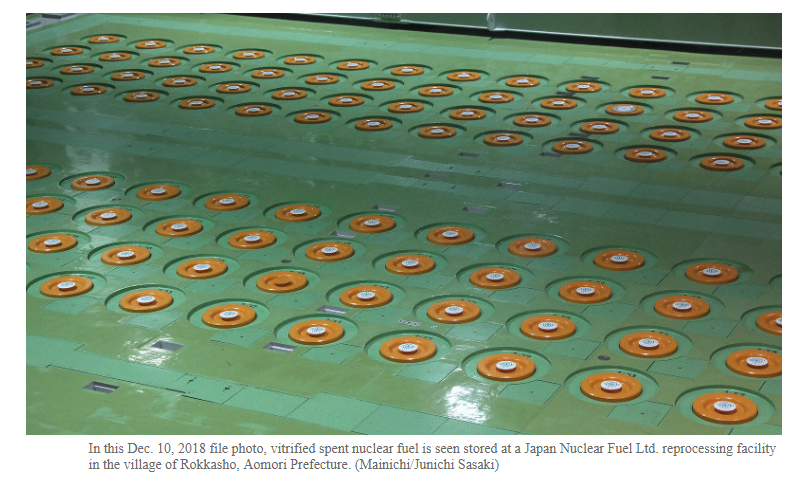 TOKYO — The Japanese government announced May 24 that it plans to arrange an international meeting to consider how to dispose of highly radioactive nuclear waste.

Tokyo is set to get approval for the plan at the Group of 20 Ministerial Meeting on Energy Transitions and Global Environment for Sustainable Growth scheduled for mid-June in Karuizawa, Nagano Prefecture, and aims to launch the first roundtable this autumn.

Nuclear waste is a problem for all countries operating nuclear power plants, and the Japan-backed international summit on cooperating to dispose of it will be a world first. Participating nations are expected to aim for improved cooperation and formulation of an international “basic strategy” on dealing with radioactive waste.

High-level nuclear refuse is usually “vitrified” — mixed with melted glass and solidified — before being deposited in an underground storage facility. Japan’s own disposal plans call for holding the waste for 30 to 50 years to cool it before burying it in stable rock formations at least 300 meters below ground. Finland is already building a major underground disposal site, while its neighbor Sweden is conducting a safety evaluation at the location of its own planned facility. However, there is no precedent for actually operating such an installation, and Japan has not yet even begun the survey process to choose a site.

The Japanese government will thus use the June 15-16 G-20 environment and energy summit meeting to urge member nations to cooperate on realistic solutions. Specifically, Japan will press nations with advanced nuclear disposal technology including those in Europe to share their know-how, and also promote international collaboration among research facilities and staff exchanges. The international roundtable will put together a collection of proposals on a basic nuclear waste disposal cooperation strategy and how to explain the issue to the citizens of member nations.