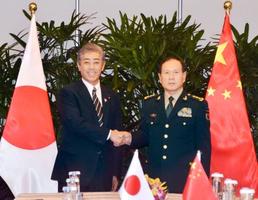 All Sunday national papers reported on a Japan-China defense ministerial meeting convened in Singapore on Saturday, saying that Defense Minister Iwaya and his Chinese counterpart Wei agreed to arrange a trip to Beijing by the Japanese minister later this year. This will be the first trip to China by the top Japanese defense official since March 2009. The two ministers reportedly reached a consensus on deepening bilateral defense exchanges at high levels, including reciprocal visits by the top SDF and PLA generals. They also reportedly confirmed coordination on North Korea’s denuclearization, and Iwaya reportedly conveyed concern about China’s maritime advancement in the South and East China Seas.

Sunday’s Sankei took a highly critical view of Iwaya’s meetings with his Chinese and ROK counterparts, arguing that the Japanese official failed to take a tough stance on China’s repeated intrusions into territorial waters around the Senkakus and the radar illumination incident. The paper claimed that Iwaya’s “appeasement” could not only trigger distrust of Japan among other nations but also undermine the morale of SDF personnel.