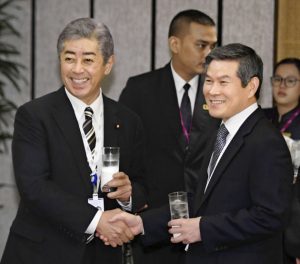 On Sunday the national dailies wrote from Singapore that Defense Minister Iwaya held informal talks with his ROK counterpart Jeong on the sidelines of the Shangri-La Dialogue, saying that this was the first session between the two since the radar illumination incident took place last December. Although Iwaya asked that the ROK military take measures to prevent a recurrence, the South Korean minister reportedly dismissed the request by saying no such incident occurred in the first place. Iwaya told the press afterward that although the two sides remain at odds over the incident, they chose to hold the meeting to promote future-oriented defense cooperation amid North Korea’s nuclear and missile development.

Mainichi wrote on Monday that the Japanese and ROK defense authorities made efforts to patch up the bilateral relations that were strained over the radar illumination incident by putting the issue on hold in part out of consideration for the U.S.’s call for quick rapprochement between its two key allies. The daily quoted Acting Defense Secretary Shanahan as saying at the beginning of the trilateral ministerial session: “I am pleased that the U.S., Japan, and South Korea have a shared vision of making the Indo-Pacific region free and open. The U.S. will continue this trilateral mechanism and strengthen defense cooperation.”  Yomiuri claimed that South Korea had pleaded with Japan to hold an informal meeting between Iwaya and Jeong on the sidelines of the Shangri-La confab because President Trump allegedly urged President Moon during their Washington summit in April to rectify Seoul’s ties with Tokyo. The daily asserted that the Moon administration desperately needs Washington’s support in advancing its signature policy of promoting inter-Korean reconciliation.