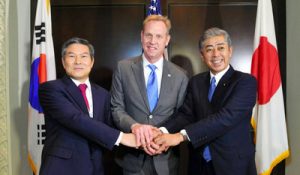 On Monday the national papers gave prominent coverage to a trilateral defense ministerial meeting between the U.S., Japan, and South Korea convened in Singapore on Sunday, noting that although the three nations agreed to maintain economic sanctions on North Korea to achieve the denuclearization of the Korean Peninsula, they reportedly did not mention “pressure” against it in a joint statement released afterward perhaps out of deference to the Moon administration’s conciliatory line toward its northern neighbor. Acting Secretary Shanahan, Defense Minister Iwaya, and Defense Minister Jeong reportedly forged a consensus on promoting trilateral defense cooperation through greater intelligence sharing, policy consultations, and joint military training. The Japanese official reportedly told the press after the meeting: “All three of us were on the same wavelength. We had meaningful discussions.”

Yomiuri and Nikkei observed that although the three partners confirmed close mutual coordination on North Korea, Japan and South Korea apparently had different perceptions of the short-range missiles that the Kim regime launched in early May. Iwaya expressed regret over the launches by calling them a violation of relevant UN resolutions, but the South Korean minister said Seoul is still investigating the launches to determine their exact nature. Secretary Shanahan reportedly did not make substantive remarks on the subject in the trilateral meeting perhaps out of deference to President Trump, who apparently has not taken issue with the latest launches. 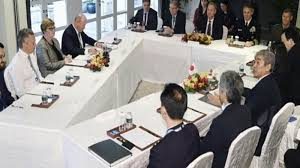 Mainichi and Nikkei also reported on a trilateral session that Shanahan held with his Japanese and Australian counterparts on Saturday, noting that the three ministers agreed to formulate common guidelines on naval security, international terrorism, and defense in cyberspace and outer space. They also reportedly agreed on greater coordination on North Korea’s denuclearization.