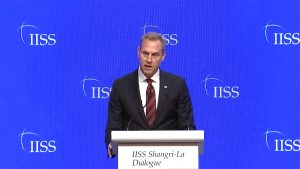 The Saturday evening editions of the national dailies reported on a speech that Acting Defense Secretary Shanahan gave during the Shangri-La Dialogue in Singapore on Saturday, highlighting his remark apparently made in reference to China that actors who seek to undermine the rules-based international order pose the greatest long-term threat to countries in the Indo-Pacific region. He also reportedly warned: “Behavior that erodes other nations’ sovereignty and sows distrust of China’s intentions must end.” While reiterating the Trump administration’s commitment to achieving an open and free Indo-Pacific region, the Secretary also reportedly stressed that U.S. allies and friends must increase their defense contributions since Washington has already borne enormous costs for ensuring regional security.

Acting Secretary Shanahan reportedly defended the Trump administration’s policy of excluding Huawei products from the 5G market on the grounds that the security of next-generation, high-speed telecommunications networks involving the Chinese tech giant cannot be guaranteed due to its close connections with the Chinese government.

On Sunday the national dailies published their takes on Shanahan’s speech. Noting that the Chinese defense minister criticized Washington’s security posture toward Taiwan at the same security conference, Nikkei wrote that neither the U.S. nor China intend to abandon their quest for military hegemony especially in view of the prolonged bilateral trade conflict. Yomiuri wrote that the Trump administration is extremely alarmed by China’s relentless arms buildup and maritime advancement. The paper cited an unnamed senior Pentagon official as saying that China’s militarization of the South China Sea has already reached the point of no return, and claimed that Washington is prepared to apply pressure on China for years to come in coordination with regional powers so as to prevent it from further expanding its sphere of influence.

On the other hand, Asahi said Shanahan’s speech was more moderate in criticizing China than the remarks given by his predecessor Mattis at the same venue a year ago. The daily speculated that Shanahan used softer rhetoric than Mattis did in view of growing concern among some Asian powers about the escalating Sino-U.S. trade friction possibly spilling over into the security arena. The paper said that although Shanahan may have elected to take a conciliatory line for now, the prospects for U.S.-China relations remain uncertain, adding that improvement depends on whether President Trump will meet with President Xi on the margins of the G20 summit in Osaka.

The dailies also focused on Defense Minister Iwaya’s remarks at the Shangri-La Dialogue, during which he welcomed Shanahan’s pledge of a lasting U.S. commitment to a free and open Indo-Pacific region. The Japanese minister emphasized that U.S. presence is indispensable to ensuring stability in Northeast Asia. Mainichi wrote on Sunday that although Iwaya backed Shanahan’s criticism of China, the Japanese government needs to conduct balanced diplomacy toward Beijing amid the growing momentum for bilateral reconciliation, as evidenced by President Xi’s planned visit to Osaka in late June and Defense Minister Iwaya’s trip to China scheduled for later this year.