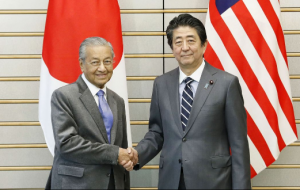 Japanese Prime Minister Shinzo Abe (R) and his Malaysian counterpart Mahathir Mohamad shake hands ahead of their talks in Tokyo on May 31, 2019. (Kyodo)

During their meeting in Tokyo, Abe and Mahathir agreed to step up cooperation in achieving a free and open Indo-Pacific region based on the rule of law, the Japanese Foreign Ministry said.

“The ‘Look East’ policy has been the beacon leading Japan and Malaysia to strengthen friendship and enhance bilateral ties,” Abe told Mahathir at the start of their talks.

“I look forward to reaffirming our commitment with Prime Minister Mahathir to update our partnership to suit the new era and develop our relations at multiple levels and in various fields and sectors,” Abe said.

Mahathir, who returned to power in 2018 after a 15-year hiatus, expressed his appreciation for Japan’s assistance, including the provision of yen loans, adding he hopes such “support will continue into the future.”

When Mahathir served as prime minister between 1981 and 2003, he launched the Look East policy of learning from Japan’s work ethic and economic growth.

Many Japanese companies, especially manufacturers, now have production plants in Malaysia as bilateral ties have strengthened. The Southeast Asian country is a major exporter of natural gas to resource-poor Japan.

During the talks, Abe said Japan gives its “utmost support” to Mahathir, who has been seeking to improve governance and reduce national debt.

The leaders also discussed the situation in North Korea as well as in the South China Sea, where China’s military buildup is raising concern, according to the ministry.

The Malaysian prime minister is in Japan to attend a two-day conference on the future of Asia through Friday, also attended by other leaders from the Association of Southeast Asian Nations.

Abe met separately with Cambodian Prime Minister Hun Sen at the prime minister’s office with an eye to deepening bilateral ties through cooperation on infrastructure building and human resources development.

Japan has been building closer ties with ASEAN countries as their cooperation is necessary to achieve a free and open Indo-Pacific amid China’s growing influence in the region. Hun Sen told Abe on Friday that Cambodia backs Japan’s initiative.

Abe has held meetings over the past three days with the leaders of Bangladesh, Laos, Singapore, Vietnam, and the Philippine, as well as Malaysia and Cambodia.