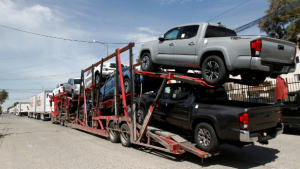 A car carrier transporting Toyota trucks waits to cross the border into the U.S. at Tijuana, Mexico. Many Japanese automakers build vehicles for the American market in Mexico. © Reuters

TOKYO — U.S. President Donald Trump’s threat of a 5% tariff on all goods from Mexico is forcing Japanese companies to reevaluate their North American supply chains, with the auto industry in particular expected to suffer a heavy blow.

Many companies had been pouring money into Mexico as an alternative production hub to China, which faces heavy tariffs from the U.S. But with that haven now in jeopardy, businesses face difficult decisions on how to avoid the growing trade war.

The balance of Japan’s direct investment in Mexico increased sevenfold in a decade to $10.4 billion as of the end of 2017, according to the Japan External Trade Organization. The number of Japanese companies operating there surged to 1,182 in 2017 from 384 in 2007, overtaking the 1,179 in Taiwan, Foreign Ministry data shows.

Automakers are the key drivers behind this trend. They have invested heavily in Mexico since early this decade, taking advantage of its highway and rail connections to the U.S., as well as its cheap labor, which costs one-sixth as much as in America.

Nissan Motor has been in Mexico since the 1960s and continued to invest there in the last decade. It launched its third Mexican plant in 2013 and exported about half the 760,000 vehicles it made in the country in fiscal 2018 to the U.S. Honda Motor opened its second plant in Mexico in 2014.

Because most of the models that Japanese automakers ship from Mexico to the U.S. are mass-market cars, like the Honda Fit and the Nissan Sentra, even a 5% tariff could hit those operations hard.

Toyota Motor, which is building a new plant in Mexico’s Guanajuato state to build Tacoma pickup trucks, said there has been “no change” to its plans to open the facility by the end of the year.

But Trump has threatened to raise the tariff — which is slated to kick in on June 10 — to as much as 25% unless Mexico takes action to curb immigration across the border. “Automobiles have an average cost ratio of 80%,” said Keisuke Hanyuda, a partner at Deloitte Tohmatsu Consulting. “If the tariff rate tops 20%, that’s all of the profits gone.”

Investors dumped automaker stocks in Tokyo on Friday as concern grows over the threatened tariff. Shares in Mazda fell as much as 9% to 1,044 yen, their lowest point since January 2013, while Honda and Nissan ended the session down about 4% and 5%, respectively.

Automotive suppliers will likely feel the heat as well. Nippon Steel and Ternium brought a joint steel sheet factory online in Mexico in 2013. Hitachi Automotive Systems has a plant in Mexico that makes products almost entirely for auto-related companies there.

President and CEO Tsutomu Tannowa of Mitsui Chemicals, which makes plastic used in car bumpers in Mexico, noted on Friday the possibility of auto production moving to the U.S. The company has plants in both countries and thus “can shift production flexibly,” he said.

Appliance makers have also built many of their products bound for the U.S. market in Mexico. While they have been relying more on contract manufacturers in recent years, Mexico remains an important link in the supply chain.

Sony outsources production of liquid crystal display TVs for the U.S. to facilities in Mexico. “I can’t comment” on the tariff’s impact, a company representative said.

Trump’s threat comes at a particularly inopportune time for many Japanese companies, which saw Mexico as the answer to avoiding U.S. tariffs on Chinese exports. Sharp had been planning to move Chinese production of large-scale displays, like those used in teleconferencing, to Mexican facilities operated by parent Hon Hai Precision Industry, a key Apple supplier.

“We may need to reconsider depending on the situation,” a Sharp source said.

Experts also question how a U.S. tariff on Mexico could impact Washington’s trade war with China.

“The Mexican tariff announcement plays into the hands of those in China that don’t want do a deal,” said Wendy Cutler, vice president at the Asia Society Policy Institute and a former U.S. trade negotiator.

“What they probably think now — not just in China, but many of our trading partners are probably thinking now, ‘Even if we do a deal with the United States, we are still going to be subject to uncertainty and possible tariff increases, so why bother.'”