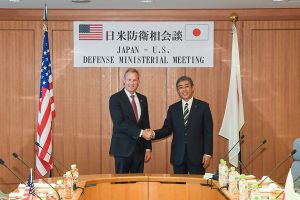 All national papers took up the U.S.-Japan defense ministerial meeting held in Tokyo on Tuesday, saying that Acting Secretary of Defense Shanahan and Defense Minister Iwaya affirmed continued coordination for making the Indo-Pacific region free and open. The two officials also confirmed the importance of ensuring freedom of navigation in view of China’s aggressive military operations in the South and East China Seas. According to Iwaya, Shanahan briefed him on the Trump administration’s policy of deepening engagement with East Asia. The two ministers also reaffirmed the bilateral commitment to achieving North Korea’s denuclearization and safeguarding cyberspace and outer space. Nikkei quoted the top Pentagon official as saying: “The U.S.-Japan alliance is stronger than ever…. Japan’s National Defense Program Guidelines complement U.S. defense strategy.”

Yomiuri wrote that the defense leaders’ agreement on the Indo-Pacific reflects their strong concern about China’s maritime operations. However, the paper also expressed the view that although bilateral security cooperation is expected to deepen further, there are issues that could undermine the trans-Pacific defense ties, such as President Trump’s insistence that Japan spend more on defense and the stalled plan to relocate field carrier landing practice (FCLP) from Iwo Island to Mageshima.

On space collaboration between the SDF and the U.S. military, Asahi wrote that the Defense Ministry is considering sending a liaison officer to the Combined Space Operations Center at Vandenberg AFB in California. Noting that the Trump administration plans to establish a Space Force in 2020 and that the SDF is also set to launch a special space unit tasked with monitoring space around the clock at an ASDF base in Fuchu by FY2022, the daily said Tokyo is anxious to defend outer space in coordination with the U.S. since today almost all military operations involve the use of satellites.