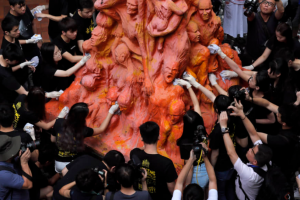 University students clean the “Pillar of Shame” statue, a memorial for those killed in the 1989 Tiananmen crackdown, at the University of Hong Kong on Tuesday. Thousands are expected to turn out for a candlelight vigil in the city. The territory has greater freedoms than the mainland does, though activists are concerned about the erosion of those freedoms in recent years. | AP

In an annual statement, the U.S. State Department marked the 30th anniversary of China’s June 4, 1989, Tiananmen crackdown with one of its most harsh criticisms to date, delivering a scathing assessment of the massacre and praising the “heroic protest movement” — a message that stood in stark contrast with Japan’s own remarks addressing the bloody attack.

“We honor the heroic protest movement of the Chinese people that ended on June 4, 1989, when the Chinese Communist Party leadership sent tanks into Tiananmen Square to violently repress peaceful demonstrations calling for democracy, human rights, and an end to rampant corruption,” U.S. Secretary of State Mike Pompeo said in the statement released Monday.

Markedly longer than the 2017 and 2018 versions, the statement was released just days after the Tiananmen incident was described by a State Department spokeswoman as “a full-on massacre of peaceful protesters” and came as the U.S. and China continue to trade blows over regional security issues and an increasingly contentious trade war.

China has never given a full accounting of the bloody crackdown that saw hundreds — possibly thousands — killed in Beijing by People’s Liberation Army troops as they moved to retake the square in the capital on the orders of the ruling Communist Party.

Collective memory of the events is believed to have waned in recent years due in no small part to a relentless campaign of censorship by the party’s leadership, which has turned the massacre into one of the most politically taboo issues in the country.

Both prior to and in the years after Tiananmen, the West and Japan had pinned much of their hopes of Chinese democratization on closer economic ties with the country as well as its integration into more multilateral organizations.

And while U.S. officials had, in the past, acknowledged that those goals had long since been thwarted, Pompeo’s statement appeared to close the books on the issue.

“Over the decades that followed, the United States hoped that China’s integration into the international system would lead to a more open, tolerant society,” Pompeo said. “Those hopes have been dashed.”

On Tuesday, the Chinese Embassy lashed out at Pompeo’s statement, saying in a pointed statement that U.S. criticism had come “out of prejudice and arrogance.”

“Under the pretext of human rights, the statement grossly intervenes in China’s internal affairs, attacks its system, and smears its domestic and foreign policies,” it said. “This is an affront to the Chinese people and a serious violation of international law and basic norms governing international relations.”

The statement also said that the Chinese government and people had “reached the verdict on the political incident of the late 1980s long ago,” and that China has enjoyed “continuous progress in democracy and the rule of law.”

It said “socialism with Chinese characteristics … proved a right path in line with China’s national conditions and supported by the whole population.”

“Whoever attempts to patronize and bully the Chinese people in any name, or preach a ‘clash of civilizations’ to resist the trend of times will never succeed,” it went on. “They will only end up in the ash heap of history.”

During a Monday news conference in Tokyo, Chief Cabinet Secretary Yoshihide Suga, the government’s top spokesman, delivered a boilerplate response when asked about the incident, conspicuously avoiding the words “military crackdown” and “massacre.”

Instead, Suga reiterated the line set by then-Prime Minister Sosuke Uno in the immediate wake of the incident that it had been “a clash resulting from the military resorting to the use of force” — a position that has been maintained by Tokyo ever since.

“I can’t help but say that it was a truly regrettable situation in which many lives were lost,” Suga said.

Despite claims by Washington that its alliance with Japan has “never been stronger,” Suga’s remarks signal that Tokyo is not clamoring to join the U.S. on contentious issues such as Tiananmen, and is set to maintain its longtime stance.

The comparatively mild statement also came amid moves by the administration of Prime Minister Shinzo Abe to accelerate improvements in Sino-Japanese ties, which had until recently remained chilly for years.

“An explicit statement about the military crackdown in Tiananmen Square and China in general was avoided to not disrupt the Abe administration efforts to assiduously return Sino-Japanese relations to their historical pattern of separating politics and economics,” said Stephen Nagy, a senior associate professor at International Christian University in Tokyo.

“The Abe administration needs to ensure that its most important trading relationship, China, remains on track while ensuring that trade ties can be used to moderate — or be leveraged to attenuate — trade pressure that could potentially be targeted at Japan” by U.S. President Donald Trump.

Zhang Baohui, director of Lingnan University’s Center for Asian Pacific Studies in Hong Kong, said Japan’s approach to China “has always been different from that of the United States.”

“As an Asian country, albeit a democracy, it has not been inclined to pursue value-oriented diplomacy toward fellow Asian countries, which include China,” Zhang said.

“Instead, Japan typically prioritizes concrete national interests over ideologies. It is a very pragmatic country and is highly sensitive to other Asian countries’ peculiar political practices that are different from its own.”

“China’s one-party state tolerates no dissent and abuses human rights whenever it serves its interests,” the statement said. “Today, Chinese citizens have been subjected to a new wave of abuses, especially in Xinjiang, where the Communist Party leadership is methodically attempting to strangle Uighur culture and stamp out the Islamic faith, including through the detention of more than 1 million members of Muslim minority groups.”

Japan has refrained from speaking out forcefully on the Uighur issue.

Asked last July if Tokyo’s position was the same as that of the United States’, Foreign Minister Taro Kono called the issue “an internal problem for China,” but added that basic freedoms and human rights should be respected everywhere.

Regardless of Tokyo’s finely tuned position on the issue, ICU’s Nagy said the continued concentration of power in the Chinese Communist Party, combined with its long-term pursuit of controversial policies, has essentially cleared away any remaining beliefs that it might allow for the country’s liberalization.

“The clear deepening of illiberalism in China, the rejection of the PCA (Permanent Court of Arbitration) July 16 decision (on the South China Sea), imprisonment of Uighur minorities in the far west of China, and the large scale deployment of technology to strengthen authoritarian CCP rule has extinguished hope in Japan and other countries that multilateral trade would liberalize China and foster better regional relations,” said Nagy.