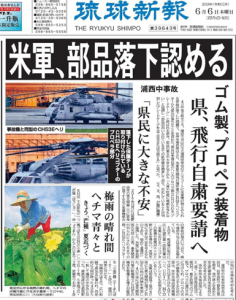 Okinawa Times and Ryukyu Shimpo gave extensive coverage to the U.S. military’s acknowledgement on Wednesday that the object that fell onto a tennis court at a junior high school in Urasoe a day earlier was a piece of “blade tape” from a Futenma-based CH-53  helicopter. Marine authorities in Okinawa reportedly explained that the falling object did not pose a threat to humans or property, adding that all aircraft using the same kind of tape are being inspected and any tape that has deteriorated will either be removed or replaced. Local officials were reportedly unconvinced by this explanation, with Vice Governor Jahana telling the press last night: “We have no choice but to conclude that the U.S. military’s maintenance and management of helicopters are insufficient. Since the incident caused great anxiety among local residents, it is extremely regrettable.” The prefectural government is reportedly set to ask the U.S. military to ground all CH-53s until the cause of the incident has been determined and preventive measures taken.

The dailies took issue with the absence of an apology from the U.S. military, with Ryukyu Shimpo declaring in a headline that the U.S. military “disregards human life.” Okinawa Times claimed that the central government is poised to capitalize on the incident to step up its PR campaign for the FRF construction initiative off Camp Schwab by arguing that the ultimate solution to protect citizens from this type of incident is to move the Futenma Air Station to the planned offshore location.