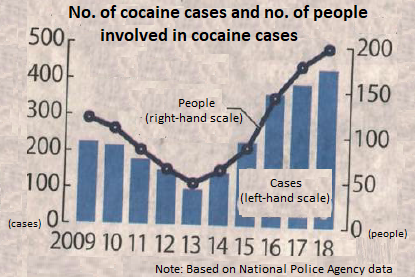 According to the NPA, the street value of cocaine is 20,000 yen per gram, four times the price of cannabis. Cocaine is sold illicitly mainly in urban areas. Japanese crime syndicates and foreign drug rings are said to be involved.

With the increase in the abuse of cocaine, the NPA has introduced devices for “spectroscopic analysis” at the Tokyo Metropolitan Police Department and certain other police headquarters from this fiscal year.

“There are cases where travelers from overseas bring the drug into Japan,” commented a top NPA official. “We want to crack down more on this so use does not spread.” (Abridged)