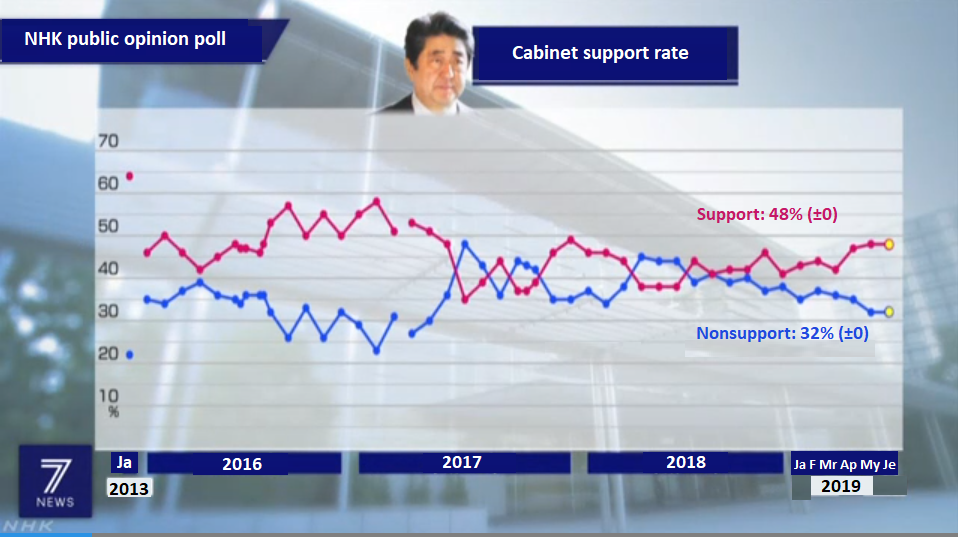 According to the NHK public opinion survey [for the month of June], 48% of pollees support the Abe cabinet, which is the same as the previous month. Those saying they do not support the cabinet also remained the same, at 32%.

The nationwide survey was conducted by NHK over the three-day period of June 7–9 on a computer-aided random digit dialing (RDD) basis and targeted men and women aged 18 or over with calls placed to landline and mobile phone numbers. Valid responses were received from 1,214 of the 2,244 people polled. The valid response rate was 54%.

According to the survey, 48% of pollees support the Abe cabinet, which is the same as the previous month. Those saying they do not support the cabinet also remained the same, at 32%.

Asked why they do not support the cabinet, 32% said “because the prime minister is untrustworthy” and 31% said “because nothing can be expected of its policy measures.”

In Japan-U.S. trade negotiations, Japan says it will not lower tariffs on agricultural products beyond levels agreed to under the Trans-Pacific Partnership. But U.S. President Donald Trump says he is “not bound by the TPP.” Asked whether they think Japan’s assertion will be respected in future negotiations, 8% said “it will be respected,” 39% said, “it will not respected,” and 41% said “neither.”

Prime Minister Shinzo Abe will travel to Iran this week. Asked whether his visit will ease tensions between the U.S. and Iran, 15% said “yes,” 38% said “no,” and 37% said “neither.”

The government downgraded its assessment of the economy in the monthly economic report last month. But it maintained its view that the overall economy is “recovering at a moderate pace.”