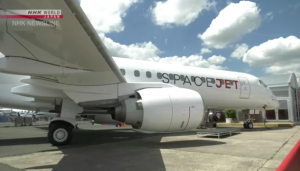 Mitsubishi Aircraft has announced it will overhaul its passenger jet development program, after the delivery of its first aircraft had to be postponed five times.

The Japanese manufacturer revealed the overhaul plan at an air show near Paris on Monday.

The company has renamed it the Mitsubishi SpaceJet, changed its appearance, and released a new logo for it.

The firm says that, in addition to the 90-seat model under development, it will focus on building a smaller version with about 70 seats, in order to meet an expected growth in demand for smaller jets in the US.

The firm’s parent company, Mitsubishi Heavy Industries, is in talks to acquire a regional jet program from rival Canadian aircraft maker Bombardier. This is part of an effort to improve aircraft maintenance operations.

Mitsubishi Aircraft is making design changes to the jet in order to work out the problems that caused delays in the delivery schedule.

The company will try to get safety certification for the aircraft by testing a redesigned model as soon as possible.

It has received orders for more than 400 planes from airlines in Japan and other countries.