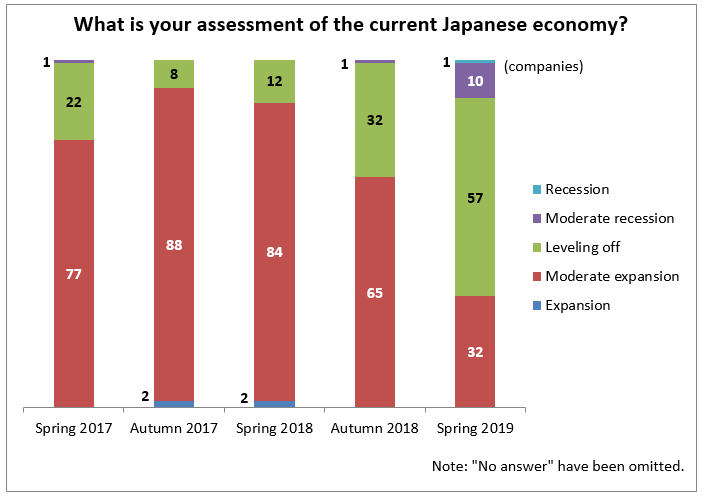 By Mana Takahashi and Akifumi Nagahashi

In the Asahi Shimbun nationwide survey of 100 leading companies, 57 companies said that the current domestic economy is “leveling off,” almost twice the number of companies (32) who gave that response in the November 2018 poll. Business confidence among the companies surveyed is rapidly worsening, and the majority cite the U.S.-China confrontation over trade as a cause for concern.

The Asahi Shimbun conducts this survey of 100 major companies twice a year in the spring and autumn. The recent poll was conducted from May 27 to June 7, 2019. Interviews were conducted with top executives at slightly less than 50% of those 100 companies.

Ten companies reported in the recent poll that they think the economy is in a “moderate recession,” rising dramatically from the previous poll where only one company gave that response. In the May–June poll, one company said that the economy is in a “recession.” The Chinese economy has been in a slowdown since around autumn 2018, and U.S.-China trade friction was reignited in early May this year. The recent poll suggests that business sentiment has changed greatly as a result.

The 57 companies who said the domestic economy is “leveling off” were asked to give two reasons for their assessment. The most frequently given response was “personal consumption” (27 companies). Real wages are not increasing as anticipated, and yet food prices are rising and the consumption tax hike is coming up in October. This is having a cooling effect on consumer sentiment, and it is thought this is behind the poll results. Asahi Group Holdings President Akiyoshi Koji comments: “Personal consumption is the basis for the Abe administration’s growth strategy, but consumption continues to be weak. It is not at a level where it bolsters the economy.”

Some 20 of the companies who said the domestic economy is leveling off cited “exports” as the reason for their assessment. It looks like the decline in exports to China is having an impact.

Asked for their assessment of the current world economy, 39 companies said it is “expanding moderately,” and an equal number said it is “leveling off.” Some 87 companies cited the “slowdown in the Chinese economy with the U.S.-China trade friction” as a cause for concern going forward. This shows that many companies are monitoring developments in the confrontation between the United States and China. Tokyo Steel President Toshikazu Nishimoto comments: “Capital investment in machinery and raw materials for semiconductor-related industries in China has declined greatly. It is having a negative impact on demand for steel.”

[Polling methodology: The survey was conducted targeting 100 leading Japanese companies nationwide from May 27 to June 7, 2019. Interviews were conducted with top executives at slightly more than 50% of those 100 companies. Some companies did not answer some questions, so the total number of companies does not total to 100 for each question. Questions and answers have been abbreviated in some cases.]