Spending at Japan companies soars to record in fiscal 2018

With Japanese investors focusing more on corporate governance, companies have come under greater pressure to “enhance investment and shareholder returns rather than let capital pile up ineffectively,” said Takashi Miwa, chief Japan economist at Nomura Securities. Spending in these categories exceeded operating cash flow, or income generated from regular business, at about 1,630 companies — nearly half the total.

Investing cash flow declined in much of the manufacturing sector, including among electrical machinery companies and automakers, while nonmanufacturers picked up the slack. The pharmaceutical, chemical, textile, retail, construction and service industries all logged record highs. 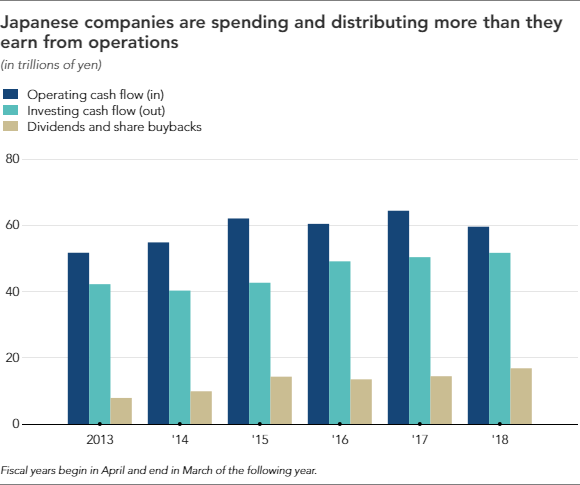 Nonmanufacturers spent heavily on labor-saving technology. The value of general contractor Taisei’s intangible assets, such as software, has surged 160% in five years thanks partly to increased investment in computerized construction.

Supermarket operator Aeon has introduced registers with touch-screen panels to simplify the checkout process. This, along with expansion of its shopping mall business in China and Southeast Asia, helped the company’s investing cash flow grow 50% last year to about 660 billion yen.

On top of this, companies are returning more money than ever to shareholders. Dividend payouts rose 2% to 11.4 trillion yen, while net share buybacks jumped 70% to 5.4 trillion yen.

The investment trend looks set to continue, with companies planning to boost capital spending 10% in fiscal 2019, according to a Nikkei survey this month.

But “because of the uncertainty surrounding factors such as the U.S.-China trade war, we’re in an environment where investment is more prone to slowing,” said Saisuke Sakai, senior economist at the Mizuho Research Institute.