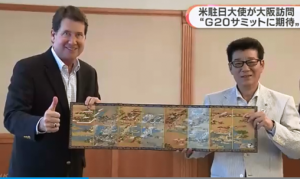 NHK Kansai reported on Tuesday evening that Ambassador Hagerty, who has been in Osaka since Monday to observe preparations for the G20 Summit, paid a courtesy call on Osaka Mayor Matsui at the city government office yesterday. The Ambassador thanked the mayor for hosting the summit, noted that it will be an opportunity for Osaka to project a strong presence internationally, and said he thought it will be the President’s favorite city. Matsui expressed his hope that the summit will be beneficial for both countries and invited senior U.S. government officials to a reception for summit participants on June 27. In reference to the incident in which a police officer was stabbed on Sunday, Matsui reassured the Ambassador that thorough security measures are being taken for the summit. The Ambassador told reporters after the meeting that he hopes the summit will serve to demonstrate the strength of the U.S.-Japan alliance. The Osaka editions of Yomiuri and Mainichi ran similar stories.