In the Japanese political arena, speculation is still rife over the consumption tax hike, which is scheduled to take place this autumn, and a possible dissolution of the Diet for a snap election to coincide with the Upper House election. Will the consumption tax actually be raised to 10% in October? 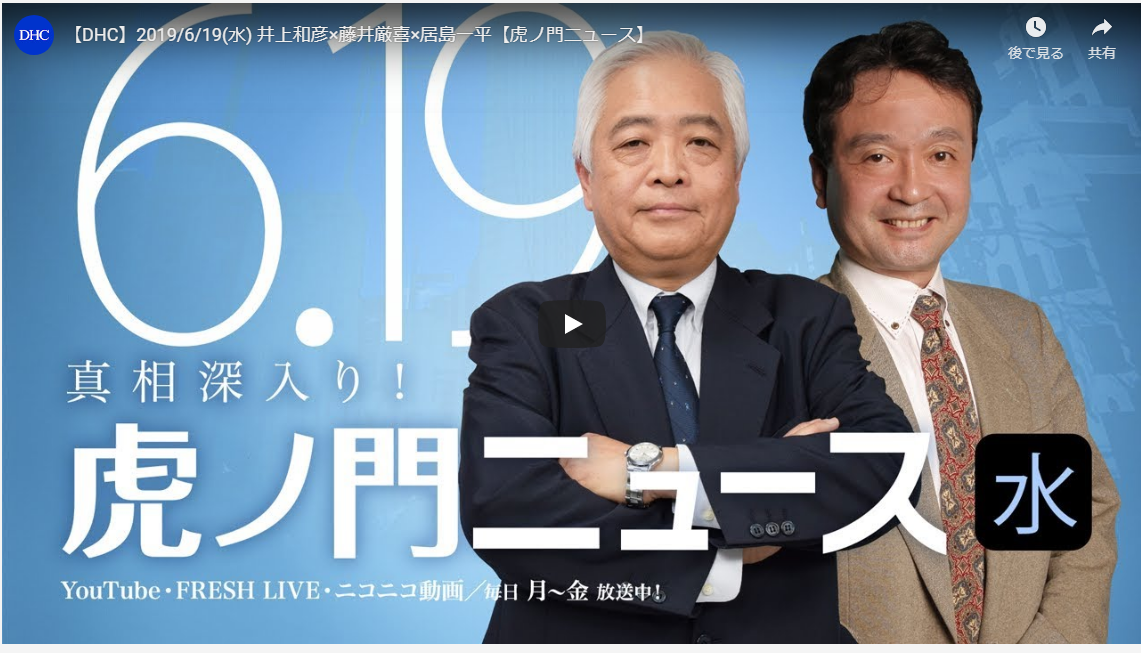 This topic has been causing commotion since Liberal Democratic Party’s Executive Acting Secretary-General Koichi Hagiuda, a close aide to Prime Minister Shinzo Abe, mentioned the possibility of “delaying the tax hike.” The news first made the headlines in “Shinso Fukairi! (in-depth coverage) Toranomon News,” an Internet program broadcast by DHC TV. But the national dailies and TV stations only referred to the news source as an “Internet program.” In fact the only outlet that mentioned the name of the program was Sankei Shimbun.

“Toranomon News” is a news program broadcast Monday through Friday from 8:00 a.m. to 10:00 a.m. from a studio in Tokyo’s Toranomon district. It features free-flowing discussions on the latest political and social issues. The program is simultaneously livestreamed free of charge on NicoNico Namahoso (live news) and YouTube. DHC TV is an affiliate of DHC, a manufacturer of cosmetics and health supplements.

Hagiuda appeared on the program on April 18. Kaori Arimoto, a journalist, was the commentator of the day. She interviewed Hagiuda based on questions that she had collected from TV viewers in advance via social media. The topic that registered the highest interest level among the questions was the consumption tax. When she asked Hagiuda about it, he referred to the possibility of delaying the tax hike if signs of economic slowdown become visible and noted that “if the government decides not to raise the consumption tax, it will have to go to the people by calling a general election to obtain a public mandate.” When Arimoto went on to ask him about the possibility of Diet dissolution, Hagiuda answered that holding Upper and Lower House elections on the same day would be “difficult in terms of scheduling.”

“Delaying the tax hike and holding a double election should be the most contentious political issue, but the old media, such as terrestrial broadcasters and newspapers, avoids reporting on it squarely,” said a person familiar with Internet media. “On the contrary, the emerging media, such as Internet broadcasters and social networking sites (SNS), distribute politicians’ views and opinions directly to viewers in real time without cutting or editing their comments. Hagiuda has appeared on ‘Toranomon News’ several times because it provides a ‘platform’ for politicians to honestly express their thoughts. Prime Minister Abe often appears on this program as well.”

Arimoto worked as an editor of a travel magazine publisher and in public affairs at a private corporation before becoming a freelance journalist. While running a production firm that specializes in editing and planning, she reports on a range of topics, such as China, India, and Tibet, as well as international and domestic politics. She serves as a commentator on a terrestrial news program but also appears on Internet programs, such as Abema TV. She is the author of “Koike Gekijo no Shinjjitu” (The truth behind the Koike theater), in which she criticized Tokyo Governor Yuriko Koike, “Chugoku no ‘Nihon Baishu’ Keikaku” (China’s scheme to acquire Japan),” in which she unraveled the truth about Chinese firms, and many other publications.

But some established media outlets have criticized “Toranomon News” and other Internet programs for “spreading fake news,” and labeled them as “netouyo” (Internet rightist) programs.

For example, Tokyo Shimbun sarcastically reported in its April 16 edition that Abe’s annual “Cherry Blossom Viewing Party” was full of “his buddies” and questioned the significance of the event. It also posted a photo of Arimoto and Otaka posing with Abe, with a headline saying, “full of “netouyo idols.”

“Toranomon News” also took up this event by posting a video and making a quip about Tokyo Shimbun’s “jealous story.” This highlighted the stark difference between the old media and the emerging media. While the former reported on the story with negative connotations, the latter bluntly conveyed the facts.

There are other Internet news programs as well. “Kazuya Channel,” which is produced by a YouTuber named Kazuya, broadcasts videos in which Kazuya discusses social issues, such as politics and national security, every day. It has attracted more than 620,000 subscribers. “The media never changes no matter how much we criticize,” said Kazuya. “That’s why I felt compelled to make my own program.” The rise of the Internet media is a new phenomenon that suggests that the old media only cares about reporting superficial news and fails to provide answers to the questions that people really want to ask. (Abridged)