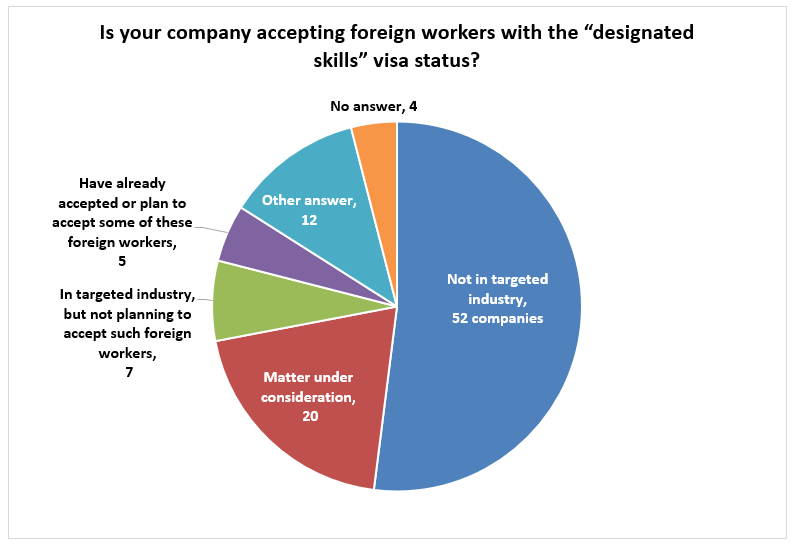 The “designated skills” visa status was established to address the labor shortage. It has been two months since the new system was inaugurated, but only five of the companies surveyed in the Asahi Shimbun nationwide survey of 100 leading companies reported that they “have already accepted” workers with this visa status or “plan to accept them in the future.” In their comments on the framework, some spoke positively of it, while others pointed out that the social framework to welcome such workers is not yet in place.

The government estimates it will accept 345,000 foreign workers in the next five years under this system. Some 32 companies who responded to the survey said they “value the system because it will help them fill their labor shortage.” Kubota Corporation President Masatoshi Kimata has a positive take on the new framework: “It will be effective to a certain degree in resolving the labor shortage brought about by the aging of society with the decrease in the birthrate.” Six other companies, however, weighed in with more critical assessments, saying, “There are many restrictions on companies so we can’t speak positively of the new system.” Asked for more information on the limitations and issues, a notable number of companies said that “too few industries can take advantage of the system.”

Only 14 industries, such as nursing care, can accept foreign workers with this visa status. Mizuno President Akito Mizuno expressed his hope that the range of industries will be expanded: “There is a notable labor shortage in some sales work. We will consider hiring some of these foreign workers if the system is broadened to include sales work.”

Ten companies said that they “do not think highly of the system because the social frameworks needed to accept foreigners are inadequate.” If the number of people working in “designated skills” areas increases, enhancing the work environment and ensuring community life will be harmonious will be major issues. Some, like Recruit Holdings, said, “It is urgent that an environment to accept foreign workers as ordinary citizens in Japanese society be created.”

[Polling methodology: The survey was conducted of 100 leading Japanese companies nationwide from May 27 to June 7, 2019. Interviews were conducted with top executives at slightly more than 50% of those 100 companies. Some companies did not answer some questions so the total number of companies does not total to 100 for each question. Questions and answers have been abbreviated in some cases.]