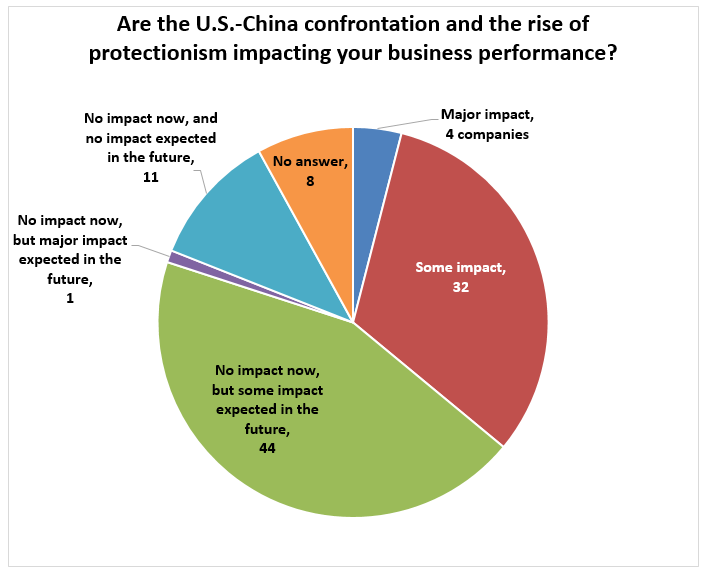 The confrontation between the United States and China over trade is rattling the world economy. In the Asahi Shimbun nationwide survey of 100 leading companies, 80% of companies said that they either are “already feeling the impact” of the confrontation or “expect to feel the impact” in the future. Currently, most respondents said that they are maintaining a forward-looking stance on capital investment, but others expressed concerns about a drop in such investment in the future.

The trade friction between the United States and China worsened dramatically after the early May announcement by U.S. President Donald Trump that he would raise tariffs. Asked whether the friction is impacting them, 36 companies said they are already “feeling the impact,” almost twice the number of respondents (19) who gave that answer in the previous poll conducted in November last year. Some 45 companies said they are “not feeling an impact now but expect they will be impacted in the future.” These survey results suggest that the impact of the trade friction is spreading in a visible way.

ANA Holdings Senior Vice President Koji Shibata, who said that his company is “somewhat impacted” by the trade friction, commented: “(The transport volume) of cargo between Japan and China is down albeit only slightly.”

Mitsui & Co. is concerned it will be impacted in the days ahead. President Tatsuo Yasunaga said, “The economic friction between the United States and China is the greatest factor for concern in the world economy. It could break the supply chains between the two major economic powers.”

There are also concerns about the impact on the world economy of the United Kingdom’s exit from the European Union. Some 21 companies said that they have taken countermeasures while 16 say they are considering doing so.

Last year securities giant Nomura Holdings obtained a securities trading license in Germany so that it would be able to continue to offer services in the EU even if the UK left. Tokio Marine Holdings is also setting up a nonlife insurance company in Luxembourg.

[Polling methodology: The survey was conducted targeting 100 leading Japanese companies nationwide from May 27 to June 7, 2019. Interviews were conducted with top executives at slightly more than 50% of those 100 companies. Some companies did not answer some questions so the total number of companies does not total to 100 for each question. Questions and answers have been abbreviated in some cases.]