No discussion of security treaty at U.S.-Japan summit 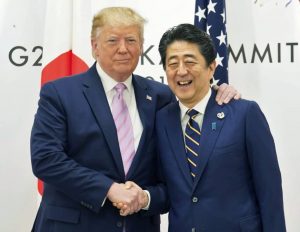 All TV networks reported today that according to a Japanese government official, President Trump did not mention the issue of revising the bilateral security treaty or voice any complaint about the security alliance during the U.S.-Japan summit this morning despite his alleged remarks in an earlier interview that the treaty obligations of the U.S. and Japan are “one-sided.” Fuji TV cited Deputy Chief Cabinet Secretary Nishimura as saying that since the two countries are in constant contact, there was no need to seek confirmation. NHK reported that the two leaders agreed at the meeting to cooperate in conveying a strong message on sustaining global economic growth at the G20 Summit and to strive to further strengthen the bilateral alliance. They also exchanged views on the North Korea and Iran situations and the bilateral trade talks.

All national dailies also published reports on their websites on the Trump-Abe meeting. According to a post-summit briefing by the two governments, President Trump and PM Abe agreed to respond to common security threats, such as North Korea and Iran, in a concerted manner. They also reportedly forged a consensus for taking steps to maintain the “bilateral alliance’s technical superiority,” with Asahi speculating that this accord was sealed with China’s violations of intellectual property and Huawei in mind.

According to Nikkei, in reply to the President’s reference to the bilateral trade imbalance, PM Abe said a total of 16 new investment projects in America have been unveiled by Japanese firms in the past three months. The President reportedly appreciated the prime minister’s announcement. DCCS Nishimura reportedly told the press that the two sides did not discuss the timing of a possible trade agreement. The President also reportedly did not mention the administration’s desire to include a currency stipulation clause in an envisaged trade accord with Japan. As for Iran, the prime minister explained to the President his willingness to continue mediation diplomacy.