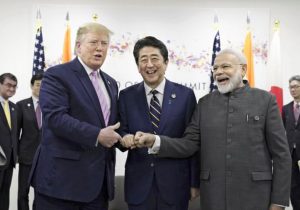 Nikkei and Sankei reported online on a trilateral summit between President Trump, Prime Minister Abe, and Indian Prime Minister Modi in Osaka on Friday morning, during which they reportedly confirmed the importance of three-party cooperation to promote global peace and prosperity. According to a White House press release on the session, the three leaders agreed to convene a trilateral summit every year in order to ensure maritime security and promote high-level infrastructure investment in the Indo-Pacific region. They also reportedly discussed security in cyberspace and outer space.