Down and out and shut-in, older hikikomori weigh heavily on society

The entire country was horrified on May 28 when a 51-year-old man went on a stabbing rampage in Kawasaki in which he killed 2 people, injured 18 others, and subsequently committed suicide. The attacker is probably the best known hikikomori, or shut-in, in Japan at the moment. He also personified the “8050 problem”– parents in their 80s having to look after socially isolated children in their 50s.

The Ministry of Health, Labor, and Welfare defines hikikomori as people who “do not go to work or school, rarely interact with people other than family members, and have been housebound for at least six months.” (MHLW website)

Concern about the issue of hikikomori is rising. The 75 regional hikikomori support centers nationwide handled over 100,000 cases in 2017. (Yomiuri 6/22) 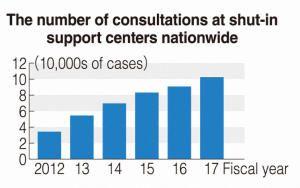 Although hikikomori used to be viewed as an issue mainly involving young people, the focus is now shifting to middle-aged hikikomori because they are increasing at an alarming rate and tend to face dire poverty when their aging parents can no longer support them.

NHK reported on May 6 that the first-ever survey on adult hikikomori conducted by the Cabinet Office last December found that there were an estimated 613,000 of them between 40 and 64 years old, compared with an estimated 541,000 between 15 and 39 (according to a 2015 survey).

This survey also found that 75% of the older hikikomori were men and about 21% had been shut off from society for three to five years. Overall, more than 50% had been hikikomori for five years or more. Some had even lived this way for 30 years or longer.

Asked who supported them financially, 34.1% answered their parents, pointing to the seriousness of the 8050 problem. One hikikomori in his 40s said that when his parents are no longer around, he will either have to live on welfare or just die. (AERA Online 6/6/2018) 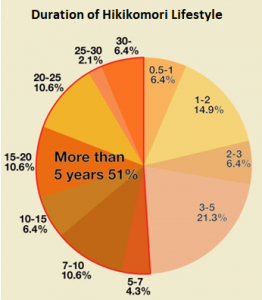 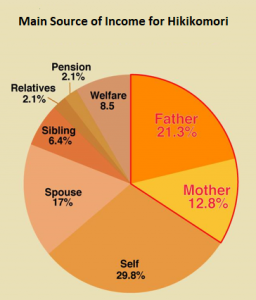 The Cabinet Office survey also showed that the following were the main factors that cause middle-aged individuals to shut themselves off from society (respondents were allowed to give multiple answers): separation from job, 36.2%; personal relationship issues, 21.3%; illness, 21.3%; inability to adapt to workplace, 19.1%. (TV Asahi 6/1)

Morito Ishizaki, the editor-in-chief of “HIKIPOS” magazine, which focuses on hikikomori issues, explained on the NHK program that one reason the number of older shut-ins has surpassed the number of younger ones is that many people who quit their jobs after joining the workforce during Japan’s period of high economic growth have remained jobless and are unable to find a purpose in life.

The Japanese government is expanding its hikikomori support programs, which used to focus on young people (usually from 15-34 years old), to include older shut-ins. In light of the mass stabbing incident, the Tokyo Metropolitan Government decided to remove the age limit on its programs (NHK 5/31). Economic Revitalization Minister Motegi also announced that such programs will be included in this year’s Basic Policies for Economic and Fiscal Management and Reform to be compiled in June. (NHK 5/30)

Meanwhile, hikikomori support groups are alarmed that the Kawasaki incident might have triggered increased prejudice against social recluses, especially after a former vice agriculture minister murdered his violence-prone 44-year-old hikikomori son in Tokyo four days after the incident apparently because he feared that the son might do something similar to the Kawasaki attacker (all media outlets 6/3, 6/4). Two such groups, Hikikomori UX Kaigi and KHJ Zenkoku Hikikomori Kazokukai Rengokai, issued statements on June 3 expressing grave concern and warning that “prejudice and stigmatization could widen the divide between hikikomori and society, driving them and their families further into a corner.” (Jiji Press 6/4) Hikikomori and their families appear to be very anxious about such prejudice, as there has been a surge in the number of consultations with support groups following the Kawasaki tragedy. (Jiji Press 6/8)