“Man who does nothing” does much for many

A unique rental service provided by a graduate of one of the top colleges in Japan has reportedly gone viral since it was launched about a year ago (NHK –4/24, TV-Asahi, 6/10, HuffPost – 6/18, and Nikkei – 6/20). In rolling out his Rental Nanmoshinai Hito (Rent a Person Who Does Nothing) service, Shoji Morimoto (@moritmotoshomi) said on Twitter: “Please use me whenever you require the presence of one person for tasks such as saving a spot for cherry blossom viewing. But I’m not going to do anything other than maybe eat or drink or have a very brief conversation with you. All I will charge is my transportation expense from JR Kokubunji Station plus food and drink or other necessary expenses associated with your request.” The 35-year-old Tokyoite, who seems overqualified for the job given that he earned a master’s degree in natural science from a leading university, says that his own academic and personal challenges compelled him to start the service.

About a decade ago, Morimoto gave up on the idea of pursuing a career in science after finishing a graduate program in physics at Osaka University because he thought he wasn’t brilliant enough. Although he managed to get a job at an education-related company, he quit after becoming stressed out due to pressure from his supervisors and colleagues. When he was completely at a loss over what to do in the future, he came across a message from a psychiatrist saying: “Nothing else matters much as long as you are there.” This advice struck a chord with Morimoto as he had lost his elder sister to suicide because she failed to land a good job. “She didn’t have to kill herself. Her mere presence was tremendously important,” he says. This traumatic experience and his own difficulties adapting to new environments made him realize that he feels most comfortable when he is doing nothing. He also wanted to test the advice on other people by simply being there for them. 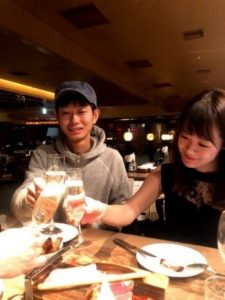 In the beginning, he received requests from people who had “practical” needs, such as standing in line to purchase concert tickets. He was also asked by a young woman to accompany her to dinner at a barbecue restaurant. She reasoned that going to an all-you-can-eat yakiniku restaurants alone would be awkward for a woman and that going there with friends would make it hard for her to concentrate on eating. However, over time, he started to get requests that he never could have imagined, such as: “I want you to keep me in your thoughts whenever you can since I have to perform a very challenging task at work tomorrow,” and “I want you to text me a good luck message because I’m going to take an exam in the near future.”

The main service that Morimoto provides is simply companionship. Although he doesn’t offer any advice or practical tips, his customers seem relieved to know that someone else is paying attention to their concerns.

Morimoto has responded to well over 1,000 requests in the past year, some of which involved witnessing life-changing decisions. For example, he once accompanied a woman to a municipal office to submit her divorce papers. He also watched a woman break down in tears when a private detective showed her evidence that her husband had been cheating on her. He also met a convicted killer and a former Aum Shinrikyo cult member, who wanted him to listen to their stories.

His Twitter followers, of whom he now has more than 169,000, have been particularly interested in the following two requests: “I want you to run into me as if by accident while I’m walking my dog,” and “I’m being transferred to Osaka and I want you to wave goodbye to me when I depart from Tokyo station.” The latter person wanted Morimoto to bid farewell because he thought he would become “too emotional” if his friends saw him off. 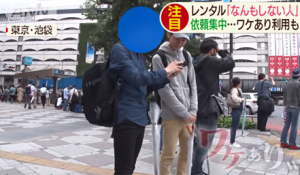 Morimoto’s service has become so popular these days that it has been featured on TV and been portrayed in a manga. Morimoto was shown on TV (right) accompanying a requester walking in an area of Ikebukuro where he had been robbed of 150,000 yen. The client had been afraid to walk there alone and wanted Morimoto to help him overcome his “Ikebukuro-phobia.” He was also recently contacted by a TV celebrity, who asked if he could be by her side when she’s on her deathbed because she thinks she will probably remain single. Morimoto reportedly accepted the request by saying: “No problem, as long as you specify the dates,” adding that she also needs to provide him with clothing, meals, and accommodations when he watches over her in her final hour.

Although Morimoto has earned practically nothing in terms of money from the service, he is very grateful to be recruited by so many people as an accidental companion, commenting: “People’s lives are all so different. I may be very idiosyncratic and not good at adapting to change, but that’s OK. Life is about being yourself. I’ll stay true to myself and do nothing.”