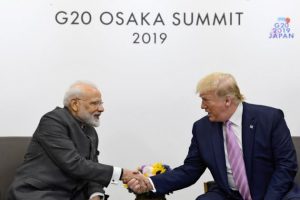 Nikkei reported online that President Trump and Indian Prime Minister Modi discussed the Iran situation, bilateral trade, and 5G during their bilateral summit held in Osaka on Friday morning. According to a readout provided by India, the two officials confirmed the importance of peace and stability in the Middle East in view of the escalating tensions between the U.S. and Iran. With regard to the U.S. sanctions on Iranian oil shipments, the Indian premier reportedly said his country has reduced its dependence on Iranian petroleum. A White House release reportedly said President Trump and PM Modi agreed to elevate the bilateral strategic partnership to the next phase.