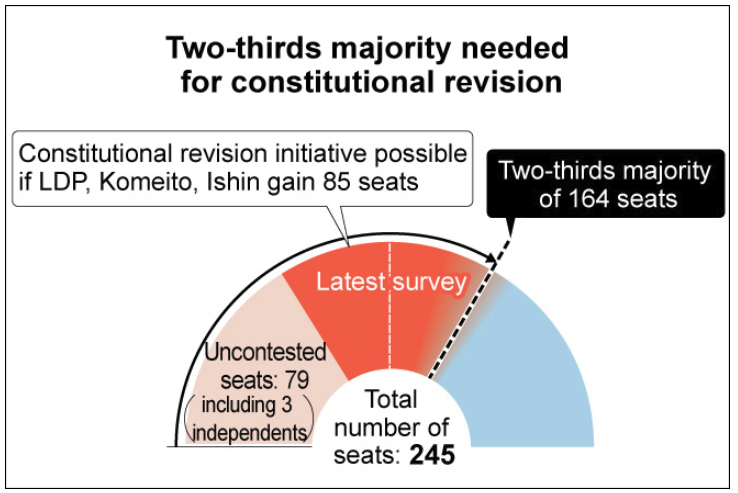 The ruling coalition looks set to win a majority of seats up for grabs in the July 21 Upper House election but not enough to initiate a constitutional amendment, an Asahi Shimbun survey indicates.

The nationwide telephone survey found little prospect of it gaining the two-thirds majority needed for the move.

As about half of the respondents in the prefectural districts and 40 percent of those regarding the proportional representation constituency had still not made up their minds about who to vote for, the outcome could still change.

The Asahi Shimbun reached 59,270 landline phone numbers of households across the nation with a voter present and received valid responses from 30,010 individuals between July 4 and 5.

Information obtained by Asahi reporters was also included into the analysis.

With 124 seats contested, the survey found that the ruling Liberal Democratic Party and junior coalition partner Komeito were headed toward winning a comfortable majority of those seats.

The LDP was found to be ahead in about 40 prefectural district seats and able to secure between 15 and 20 seats in the proportional representation constituency.

The combined total would give the LDP slightly more than the 56 seats it won in the last Upper House election in 2016.

However, it appeared unlikely that the LDP alone would end up with a total of 123 seats that constitute the majority in the Upper House, given that it only has 56 uncontested seats.

Komeito was expected to improve on the 11 seats it held and which are being contested in the poll. All seven candidates running in the prefectural districts looked set to win.

The party appeared to be heading to win about seven seats in the proportional representation constituency.

The two parties in the ruling coalition can expect to win a combined 70 to 75 seats. Combined with the uncontested seats the two parties hold, the coalition was expected to maintain a solid majority in the Upper House.

More problematic were the prospects of it gaining the 164 seats that represent a two-thirds majority.

Adding Nippon Ishin (Japan Innovation Party), along with independents who also support constitutional revision, means that a total of 79 uncontested seats belong to those who want to amend the Constitution.

In order to obtain a two-thirds majority, the ruling coalition and Nippon Ishin would need to win a total of 85 seats, but the survey found that the more likely result would be around 80 seats.

Among the other major opposition parties, the Constitutional Democratic Party of Japan looked to be on the verge of more than doubling the nine seats up for election, with prospects that it could gain a total of about 20 seats.

The Democratic Party for the People, however, did not have the same momentum as it appeared unlikely to hold on to the eight seats being contested.

The Japanese Communist Party appeared to be heading for a gain on the eight seats it held that are being contested.

A key reason the ruling coalition looks likely to win a majority of the contested seats was the breakdown in the 32 battleground single-seat prefectural districts.

The five opposition parties have unified behind a single candidate in all the single-seat districts. But the candidate appears to be ahead or slightly ahead in only four of those districts.