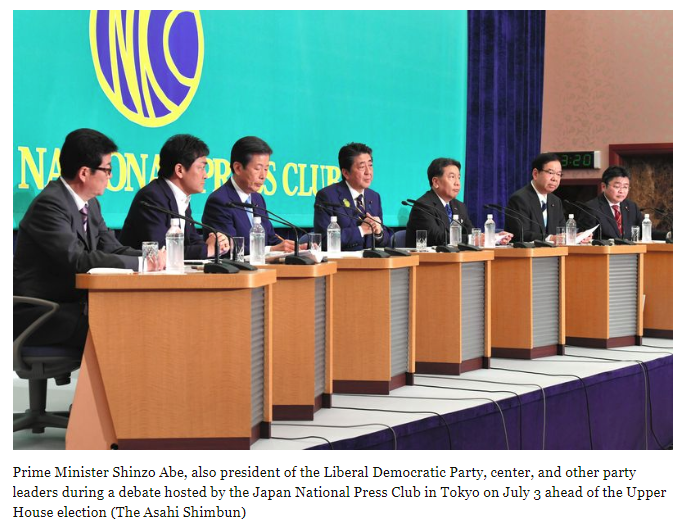 Many Japanese are worried about the future of Japan’s social security system with good reason.

They are wondering whether they will keep receiving the same levels of pension, health-care and nursing-care benefits in the coming years, fearing that they may have to pay much more in the future in insurance premiums and taxes to help finance these programs.

When asked recently whether he sees the future need of another consumption tax hike in addition to the planned rise in the tax rate to 10 percent this autumn, Prime Minister Shinzo Abe said he has no intention of taking such a step while he is in power.

“I don’t think it will be necessary to raise the tax further at least for the next 10 years or so,” he said during a July 3 debate among party heads for the July 21 Upper House election at the Japan National Press Club.

NO TALKING ABOUT BURDEN

Will the nation be able to overcome the social security challenges posed by the aging of its population amid low birthrates, which Abe has even called “a crisis for the nation,” without imposing an additional financial burden on taxpayers?Many voters suspect that Abe is only trying to avoid talking about the harsh reality of the system, a clearly unpopular topic among voters, prior to the election.

During the official campaign period for the Upper House poll, which began on July 4, political leaders should offer their own visions for the future of social security burdens and benefits.

This is a vital policy issue for the nation, which is facing the grim prospect of a rapidly aging and shrinking population.

Abe’s questionable assertion that no more consumption tax hikes are in store should not discourage serious campaign debate on the necessity of increasing the burden on taxpayers.

When a recent Financial Services Agency panel report caused a stir by saying elderly couples would need at least 20 million yen ($185,400) in savings to make ends meet over a 30-year period, the ensuing controversy reflected deep-running anxiety among the public about their sunset years.

As opposition parties have criticized the report, Abe has responded by saying there is no magic wand to increase pension benefits without raising the burden. His argument clearly is that there can be no way to bring more social security benefits to the people without forcing them to pay more into the system, which is financed by their own contributions.

But Abe himself should also take the blame for a lack of healthy debate on the sustainability of social security as he has failed to offer a specific future vision of the system.

The bipartisan policy initiative for integrated tax and social security reform, which includes an increase in the consumption tax rate to 10 percent, charted a course for the social security system until fiscal 2025, when all baby boomers will be 75 or older.

The blueprint was aimed at putting the system on a stable financial footing through a mix of measures including an increase in the burden on the elderly as well as cuts in benefits through a review of insurance coverage.

But the necessary but painful spending reform has been postponed, while the consumption tax hike has been put off twice and the plan on how to use additional revenue has been changed. As a result, the balance between burdens and benefits has been upset.

The bad news is that the population will continue aging in the coming years, and the number of elderly citizens aged 65 or older has yet to peak.

The ratio of social security spending to gross domestic product is projected to rise to 24 percent in fiscal 2040. The prospect calls for a radical overhaul of the system.

The system has become frayed, creating a slew of new policy issues that are crying out for urgent action.The integrated reform has introduced a set of measures to reverse the downward trend of the birthrate, including expansion of day-care services. But the birthrate has declined in the past three years, showing no signs of taking an upturn.

The Abe administration plans to introduce a free day-care program for children aged 3-5 in October as the centerpiece of its strategy for supporting families with young children. But its effects will be limited because the beneficiaries will be mainly high-income families.

Some opposition parties are calling for financial support to families raising children, such as increased child-care allowances. Promoting paternal leave requires effective steps to allay concerns about decreased income, such as increased benefits for absences from work.

The post-retirement income shortfall of 20 million yen has also underscored afresh the existence of elderly people without sufficient pensions and young people struggling to save for the future.

Workers in their 30s and 40s, who joined the work force amid a serious job crunch and failed to secure stable positions, are facing particularly gloomy financial prospects for their post-retirement years as their nest eggs and pension benefits will be meager. There are concerns that these people will fall into poverty after retirement.

The government has pledged to beef up policy support for people who entered an extremely weak job market upon graduation. But the measures in place, such as state subsidies to employers for offering full-time jobs to those people, have proved much less effective than expected. The government needs to come up with measures better tailored to the reality.

ABE SHOULD LAY OUT CLEAR, SPECIFIC VISION FOR SYSTEM

Abe has yet to offer clear answers to any of these key social security issues.Does he intend to push through radical spending reform? Or does he plan to secure other revenue sources to finance the programs?

Abe has stressed that growth in tax revenue and employment due to the effects of his economic policy, known as Abenomics, has bolstered the financial foundation of social security. But the administration has failed to carry out its plan to revamp the state finances, which is based on excessively optimistic forecasts for economic growth. The administration should not indulge in wishful thinking about the nation’s fiscal health.

Opposition parties have set their positions against the consumption tax increase and are instead calling for higher taxes on high-income earners and big business. But it is doubtful that this approach will secure sufficient funds to finance swelling social security spending.

During the July 3 debate, Yukio Edano, head of the main opposition Constitutional Democratic Party of Japan, said the integrated tax and social security reform including the consumption tax hike was a mistake and argued that the policy priority should be placed on helping people suffering from financial difficulties at the moment.

It is indeed vital to tackle current problems. But political leaders cannot hope to allay public anxiety about the future without presenting a medium- to long-term vision.

How much money will actually be needed over the long term to keep funding the social security system and deal with possible new policy challenges? How far will reform go in curbing growth in social security spending?

Political leaders are responsible for building a national consensus on a grand plan to reform social security expenditures across programs and to secure long-term financing for the spending.

The Upper House election should be a starting point for a fruitful political discourse on the road map for new integrated reform.